When Vivien lost three stone in weight with no effort, she knew something was wrong, but her GP initially put it down as unexplained weight loss. Vivien pushed for tests, and as a result she was diagnosed with chronic lymphocytic leukaemia. Here, she shares her Spot Leukaemia story.

I was working and was a carer for my mum, so I was always tired, but when I suddenly started losing weight with no effort at all I knew something was wrong. I went to see my GP and he ran a few tests. However, he couldn’t find anything wrong, so said he’d put it down as unexplained weight loss. I wasn’t happy with that, especially as I’d lost three stone in weight without trying, so he referred me for tests to see if I had any bowel problems.

Cancer never crossed my mind for an instant – that was something that would happen to someone else. I’m not a pushy person either, and I wouldn’t normally question a doctor’s opinion, but something made me question it that time and I’ll always be glad that I did. 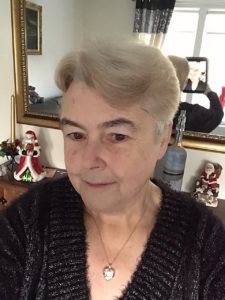 I was admitted into hospital overnight in preparation for tests. The surgeon said they had come back negative, so I could go home. Then he decided he’d do a CT scan to be extra sure. Next morning, I was on my way out of the ward to go home and the surgeon came dashing onto the ward and said I couldn’t go as I’d lit up the board on my scan and he needed to do a biopsy.

I went home Christmas Eve knowing that I had to wait three weeks for the results. I cried all over Christmas, it was a horrible time. We always had a big family get together on Christmas Eve, plenty of food, laughter and Christmas songs to be sung. I shut myself in my bedroom and just lay there listening to everyone having fun. I just told them I was tired. I always cooked Christmas dinner with my mum, and we always had my sister and her husband join us. I went through the motions, but I was crying inside; I honestly thought it might be my last Christmas. I was so pleased when my appointment day finally arrived, as those three weeks of not knowing were the worst weeks of my life.

When I got the results from a consultant haematologist, I was told I had chronic lymphocytic leukaemia (CLL). She said it was one of the best leukemias to have and it shouldn’t bother me 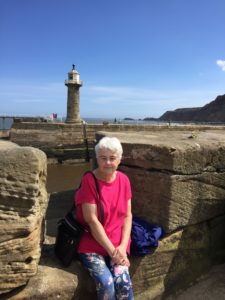 too much. I was put on Watch and Wait, and I was OK for over 12 months before I really started to feel exhausted. It was the CLL – I had haemolytic anaemia and it was destroying my red blood cells. High dose steroids fixed it, repeatedly, then they weren’t working, so it was six months of chemotherapy.

They hoped it would give me a few years of remission. I had eighteen months.

A bone marrow biopsy showed my bone marrow was full of it again, so we tried a new targeted therapy, a tyrosine kinase inhibitor (TKI) called ibrutinib. Alongside this I had intravenous immunoglobulin therapy every four weeks to help keep infections at bay. It worked well for 15 months, then I was plagued by UTIs, one after the other, and they were causing heavy blood loss too. The ibrutinib and the immunoglobulin were stopped as they were thought to be the cause. Since then, I have stayed remarkably well.

The symptoms of leukaemia are so vague and could relate to anything, people must be made aware of what to look for.

Our Buddy Support Service is available if you want to chat to someone who understands exactly what you’re going through.