Trudi was taking some time off from working as an urgent care nurse when she believed she was coming down with a ‘bug’. However, her symptoms quickly progressed, and by the sixth day Trudi was forced to take matters into her own hands to get diagnosed. Here, she shares her story.

It was February 2018. I was what I thought of as a fit and healthy 52-year-old woman. I worked full time as a nurse in urgent care, I had a happy marriage and full family life, I was always busy. The week before I became ill, I had performed on stage in a gorilla outfit dancing to ‘Monkey Man’ in my husband’s ska band and I can tell you… you have to be very fit as its very hot and very exhausting – as well as pretty stupid.

I had two weeks leave from work and, as usual for February, I felt tired, run down and pale as this approached. While on leave, I started to ‘get a bug’ (which was also fairly typical), but as an otherwise fit and well woman, I just thought, ‘you don’t need a doctor, just treat yourself and crack on’. So, I dosed up on paracetamol and lots of fluid and rest.

By day three I had exceptionally swollen glands and I thought I better get some antibiotics for this ‘tonsillitis’. I did the consultation over the phone with my GP as it was snowing and so I couldn’t get to the practice.

By day six, I knew something was wrong. I hadn’t got off the sofa for six days, and I had started vomiting (maybe blood but I couldn’t believe that was possible). It was my increased breathlessness and low saturations (I used my own pulse oximeter), as well as nearly collapsing when doing anything physical, that made me fear sepsis, so I called the GP again. As I expected, they said: ‘oh well, you’ve only just started your antibiotics’. I insisted on being seen; they did see me but just wanted to add another antibiotic in. I demanded a blood test as I was still scared it was sepsis. I went home but was sick again on the way and so I called them back. We agreed to call for an ambulance. They were rushed off their feet and so sent a first responder who looked at me and saw a normal healthy-looking person and so said “you’re not going to die today” and left!

That evening, I took myself to our OOH (out of hours) service (who I work for) and awaited my results. They were devastating and one of my colleagues had to tell me it looked like I had acute myeloid leukaemia (AML).

That night was spent on a trolley in AAU mainly being ignored because I still looked overtly like the healthiest person in the room, even though I was probably the sickest. My white count was over 120 on admission and up to 220 by the next morning. What was amazing was the haematology team – who must have gone into overdrive when my result came through – they started chemotherapy and goodness knows what else immediately. They absolutely saved my life; I already had kidney and liver damage at this stage. I was a mess.

I was then admitted to the oncology ward with just three isolation rooms. I spent the next six weeks very, very ill, in complete shock but clinging on. My family were told there was a 50:50 chance of survival in the initial admission for me… everything was chaos. I had infections, clotting problems, kidney damage and other horrible complications. The sense of shock and loss was overwhelming.

I had one week at home and then I was back for the second six-week stay for chemo round two. At least this time I was not so ill when it started and so it was physically easier to endure, but now I was being told I needed to have a stem cell transplant (SCT). This was described as having a 20% mortality rate, so I was terrified; I didn’t want it. I read the seven steps booklet about all the things that can go wrong and I thought I’d rather take my chances. But my chances without it were 90% likely to come back, aggressively. Stem cell transplant could only offer me a 60% chance of cure, but it had to be worth trying given the other choice. But everything felt grim. I felt I had become a cancer victim, I had no hair, I had lost so much strength, I felt frail, weak and a victim, I felt dead whilst alive at my lowest points.

Throughout this, the hospital team were wonderful, and the matron arranged for another ex-patient (who had gone through SCT) to come and visit me and my husband. She was amazing, and believe me, I was cynical before her visit and thought they would send me a ‘poster girl’ for SCT, but no, they sent a real and wonderful human being who helped me and my husband face the prospect of the SCT.

I was lucky that a donor match was found for me at a point that meant I only had two rounds of chemo then the SCT – my lovely donor was a young woman from Poland. I had to be in a hospital further away from home for the SCT, which felt even more isolating, although I didn’t really want any visitors anyway. It was horrible. There is no sugar coating it. The Hickman insertion and apheresis beforehand, as well as the most intense gruelling poisoning by way of conditioning chemotherapy, was vile. However, I was so well cared for by the nursing and medical teams who juggle each person’s complex bespoke plans hour by hour for weeks on end.

In retrospect I did quite well. My stay was the average six weeks, and I did have the expected problems with viral infections, but was lucky (so far) not to encounter too much else in the way of complications. The loneliness and isolation, the emotional and psychological trials were just as hard as the physical ones. Right now, I believe I am in remission. I feel well in myself but no longer trust how I feel as you just live with such uncertainty.

I currently only take two drugs and have no obvious side effects, although my skin is definitely more sensitive and prone to rashes and sensitivity – I found this embarrassing, especially in the genital area. I actually have also gained a lot from this incredible experience; my life is richer. I thought I already didn’t take life for granted, but until your life is actually threatened you do not value what good health and life really means. I appreciate every breathe I take, every day I wake up, every leaf or bird I see, every moment of being outside. I have rediscovered painting and drawing and found I’m quite good at it.

I have gained new and wonderful friends, including the woman who came to see us in hospital, and I have lost a few along the way, which is also no loss. It has made me become so much more compassionate and benevolent to man but conversely more intolerant where I see waste and selfishness.

However, it has been hard since coming out of hospital. People think you must be over it now. The amount of people who say you just need to get back on with your life as ‘we could all be run over by a bus tomorrow’. Someone even said to me: ‘Oh, you will be okay because you are a vegetarian, a woman and you were very fit’.

I know they mean well, but you just want people to not feel sorry for you, to just understand a bit more, but then I didn’t understand much about it before I went through this, and I’m a nurse!

I am still recovering, still need to boil my water and limit my foods. I have started to return to work but only from home. I am lucky in my role I can do a certain amount of work ‘behind the scenes’.

It is vital that both health professionals and the public know when to consider leukaemia. I didn’t think leukaemia, but my nurse training knew when I was acutely ill and that something was wrong and I must push, but I do wonder if that eye check which wasn’t acted on, that low platelet count, that mouthful of ulcers in the preceding months, were signs. I never had odd bruising, I did have pallor and tiredness, but in February and at 52 so do most of us! 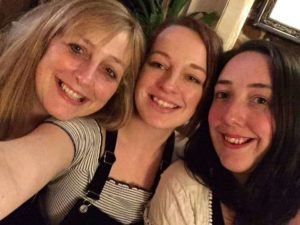 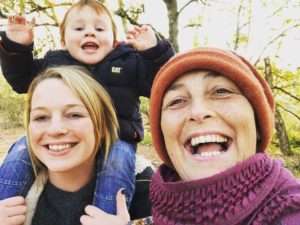 The aim of ‘picking up where one left off’ before the cancer diagnosis is a real challenge for many people. There is an expectation that completing active treatment will bring a sense of relief and optimism, however, many people describe feeling insecure, isolated, fearful and an overall sense of vulnerability during this time.