Jamie was enjoying the benefits of two new jobs when he suddenly fell ill after a busy weekend. He assumed he simply had the flu, but after his wife urged him to see his GP, he was rushed to hospital to be diagnosed with acute promyelocytic leukaemia (APL). Here, he shares his Spot Leukaemia story.

I’d worked in a call-centre for nearly 20 years. But in 2018, it was decided to close the Swansea office. After a long period of fighting the closure, I finally took redundancy at the start of 2019, and started two new jobs – one managing an online community for a tech company, the other part-time teaching adult learners at Cardiff University.

I’d really landed on my feet—two great jobs after a lot of worry and uncertainty, and I got to visit Orlando with work, and had similar trips to Austin and Tokyo in September lined up. We booked our first foreign holiday for October, as our kids (10 and 6) had never flown before. I was loving teaching, and my full-time job was so rewarding.

And then, after a weekend with my parents (I’d been able to afford to take my dad to a football match for the first time ever that weekend), I got ill. 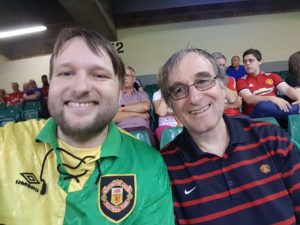 PHOTO ABOVE: JAMIE BEFORE HE WAS DIAGNOSED

I started feeling unwell on the Sunday, but prior to this I’d noticed other symptoms, such as bruising. I’d been cycling on my exercise bike and had a black bruise on the bottom of my foot. After a week or so it cleared up, and then it happened again the next time I cycled. Around the time I was admitted, I’d accumulated a number of deep black bruises on the side of my ribcage, where my arm protects my body, and I was sure I hadn’t been bumped around.

For a week or two, I’d also been going to bed early (I never do that), and I’d been having headaches (which are equally rare).
Then, on the Sunday afternoon (Aug 2019)—the first day I felt ‘ill’—I’d had a busy weekend, and I crashed out on the sofa at four in the afternoon. I felt like I had the flu, but without the cough and the sneezing. My feet hurt and my legs hurt.

I called in sick from work (I never miss work) as these flu-like symptoms just got worse. I had two full days of fever, which was almost manageable with Lemsip. But as it came up to the time I could take cold medicine again, I was in pain. All my previous ailments flared up—my feet hurt, my jaw and legs were cramping and spasming, and I even felt pain where I’d broken my arm when I was 14.

On the Wednesday, I went to the doctors, mainly because my wife was getting annoyed with my constant sighing and heavy breathing and snoring! The GP arranged an emergency appointment at the end of their morning session. I was waiting so long for my name to be called that my paracetamol had worn off before I went in to see the doctor, and the fever started up when I finally went in the room. I could hardly open my mouth or straighten my legs as my muscles were in spasm. After about half an hour of prodding and poking, he phoned someone at the hospital: I overheard him say, “He’s a very unwell man.”

I went straight to the assessment unit and was treated initially for sepsis. By the next day, blood tests showed it was leukaemia, and I had a bone marrow biopsy carried out that day to confirm it. I remained in the admission unit for a couple of days before I was moved to the haematology ward in Swansea’s Singleton Hospital.

I had leukaemia—acute promyelocytic leukaemia (APL). I didn’t really understand. Wasn’t leukaemia a children’s disease? And it’s a cancer? The literature provided by the likes of Leukaemia Care was vital in helping myself and my family come to terms with the situation and the outlook.
On August 7th, I went to hospital. For the next two weeks, I was mostly unaware of all that was going on, so much of this story has been replayed to me by my wife, Beth.

I was in pain, shaking with fever, and we later found out I had a sub-retinal bleed meaning I couldn’t see properly. Beth had the awful task of having to break the news to me, as I’d promptly forgotten what we’d been told by the doctors. Every time she told me, I cried, we talked, I fell asleep, and then she’d have to tell me again as I’d forgotten once more.

Once on the ward, I started on the combination treatment of arsenic trioxide (isn’t that like a deadly poison?) and ATRA. I was also pumped full of blood products; I remember the platelets well. Unfortunately, I had a reaction to the treatment. I swelled up, putting on two stone in just a couple of days – my feet were gigantic – and was even more unwell. I had differentiation syndrome and had to come off the chemotherapy drugs.

After a week in Swansea, I was moved to Cardiff’s university hospital, as they were better placed to treat me. I was having platelets and potassium and blood transfusions until I was well enough to go back on the arsenic. They put me on normal chemo drugs, and my white blood cell count was 190. We had to wait for it to come down to acceptable levels in order to test restarting arsenic and ATRA to see if I could tolerate them again, and this wait was painfully slow with a decrease of around 20 every day. I then had differentiation syndrome a second time once I was finally back on the good drugs. “Don’t worry,” I was told, “we don’t see people getting it a third time!” 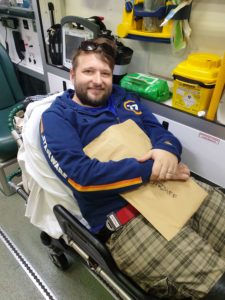 PHOTO ABOVE: JAMIE TRANSFERRED TO CARDIFF

Eventually I was doing better, and after a makeshift 40th birthday party for my wife in the hospital (a far cry from the weekend away I’d previously arranged!) I got the great news that I’d be moving back to Swansea that day. I spent two and a half weeks in isolation, before being released in mid-September, after six weeks of hospitalisation. 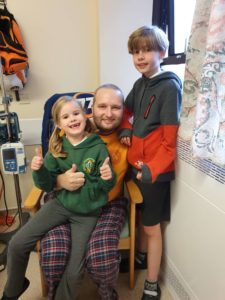 PHOTO ABOVE: JAMIE CELEBRATING HIS BIRTHDAY IN HOSPITAL

It didn’t last. After five days I was readmitted when I came down with a mystery illness; my kids couldn’t visit as it was face masks and goggles territory until I was eventually diagnosed. I had a lung infection which transpired to be PCP pneumonia, and I spent my birthday in an isolation room in hospital. I was there for over two weeks as they struggled to find the right treatment.

I was eventually released home and able to start treatment as an outpatient for the first time—something that I’d been told I would be doing after the first initial week in hospital. It had taken 10 weeks to get to this point. But again, it didn’t last, as I was released without my antiemetics and very quickly became so dehydrated from throwing up that I had to be readmitted for fluids, and yet more antibiotics for another lung infection: bronchiolitis this time.

Since mid-October I’ve been home. I continued to go to the haematology ward in Singleton for cycles of chemotherapy. I finally finished chemo at the end of June this year, 11 months after my world fell apart. I have to continue having monthly blood tests for the foreseeable future, and bone marrow biopsies every three months for the next few years.

My mental health really suffered, especially when I was in isolation. I was already on Prozac, but the stress of having APL was breaking me. I was given lorazepam and diazepam to take the edge off. Sometimes I just needed a cry, and I’d sit by the pond in Cardiff hospital and listen to the most heart-breaking songs I knew. That helped. I couldn’t read as my eyesight was so bad, but I found writing really helped me process what was going on, and how I felt. I’m always writing notes to myself in my notebook or on my phone—fragments of memories, to help me remember.
But at times, especially with pneumonia, I had had enough. I was so ill, permanently hooked up to the oxygen supply. I didn’t feel strong enough to fight anymore. I didn’t have the energy. How do you battle cancer and pneumonia? My wife talked to me, helped me get that fight back. The nursing staff and mental health team were fantastic too.

My kids have had it hard too, as has my wife. It’s really taken its toll on them, but they have adapted so well to it. We obviously cancelled our travel plans and aimed to make it to them this year. Unfortunately, COVID-19 came along, and as I’m still having to visit the hospital, I’m at risk each time I go. The staff there have been excellently PPE’d so that is always reassuring.

We’re shielding as I’m extremely vulnerable, and it has been hard—we’ve been bouncing off the walls—but we’re surviving. My wife is doing great work as the home educator, we have regular supermarket deliveries, and Netflix and Nintendo—the Animal Crossing game has kept us well occupied! I’m back on the exercise bike, (and lockdown enforced treadmill) and no bruising! Neighbours have collected prescriptions, bread and milk and bin bags. Everyone has been so kind.

I wish I’d known the symptoms of leukaemia and not been so in the dark; I’m a fairly clever person but I just didn’t know anything about it, the illness or the symptoms. As I finish my treatment, I want to share my story to help raise awareness, as speed of diagnosis is clearly of the essence. The problem is that so many of the symptoms taken separately are run-of-the-mill—they could be tiredness, rundown, flu, coronavirus, sepsis. The important thing to be aware of is the combination of these—and mysterious bruising being a giveaway—and seek medical attention quickly if you have these.

Returning to a “normal” life can see you reintroducing exercise into your daily routine. The following links contain excellent resources about exercise during and post treatment for a blood cancer.