Emma Allen was just 31 when she was diagnosed with essential thrombocythaemia (ET), and later prefibrotic myelofibrosis (Pre-MF) and polycythaemia vera (PV). However, following her diagnosis, it was discovered that her platelet count had in fact been abnormal for at least seven years, yet had never been investigated further. Here, she shares her Spot Leukaemia story. 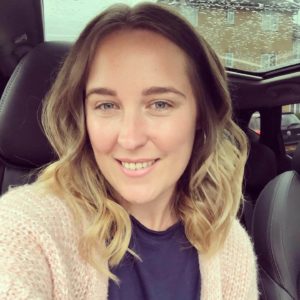 I hadn’t felt well for many years and had had various symptoms from early in my 20s including fatigue, migraines, excessive bruising and stomach problems such as nausea. In more recent years prior to my diagnosis, I started to suffer from added symptoms such as dizziness which would regularly cause me to fall into walls and I would frequently feel as if I would faint. I assumed I was perhaps deficient in a particular vitamin, but in February 2018, my husband encouraged me to have a private health screening where they discovered a high platelet count and a borderline haematocrit level. I went to my GP immediately.

My GP was excellent and sent me for cancer screening. I was told that a consistently high platelet count was as good an indicator of cancer as a lump in the breast. Having looked at my medical history to see what prior complaints I had attended the surgery for, the GP sent me for lung and oesophageal screenings which thankfully came back okay. The GP then referred me to a haematologist who screened me for heart failure and, when results came back negative, he stated that he was ready to discharge me. Thankfully, I had done some reading about a high platelet count and learned about a condition called essential thrombocythaemia (ET) which is a slowly progressing blood/bone marrow cancer which comes under the umbrella of myeloproliferative neoplasms (MPN). I asked him to do the test. He told me the cancer was too rare and that I was too young given that it was mostly found in people aged 60 and over and that it would be a waste of time. I was assertive and made it clear that unless he could give me an alternative reason for having a high platelet count, I wanted to be tested for the gene mutation. He reluctantly agreed and the mutation Jak2 was discovered.

I was immediately referred to a specialist nurse who explained that I was being diagnosed with an incurable blood cancer, that it was a form of leukaemia, and that we would now need to look at options with regards to monitoring and treatment. I was obviously very upset, but due to my having read up on it prior to diagnosis, I wasn’t as shocked as some people may have been at their time of diagnosis. I asked the nurse to look back at my records to see how long I’d had a high platelet count for. She said that the records only went back for seven years, but that my count had been abnormal for the whole of those seven years. I was completely devastated and, for the first time ever, felt I had been let down by the system. I’d had various blood tests over the years, and every time I had been told that my platelets were too high, yet nothing had ever been investigated, nor had it ever been indicated to me that a high platelet count was potentially a serious problem.

I asked to be referred to Professor Claire Harrison, based at Guys and St Thomas’ in London, who is one of the world’s leading specialists in MPNs. She was an excellent form of support and explained the condition in more detail. I was told that my biggest risk was clots and, therefore, strokes and that I needed to start taking aspirin daily to prevent thrombotic events. In addition, I was offered a bone marrow biopsy to check for fibrosis which I went through a few months later and, indeed, fibrosis was found. As a result of this and other factors, my diagnosis of ET was upgraded to another related branch called prefibrotic myelofibrosis. This diagnosis is given when fibrosis is present, yet not the quantity that would be found in someone with overt myelofibrosis. However, given that fibrosis is present, I have been told that I am more likely to develop myelofibrosis (MF) at some point in the future where prognosis looks to be significantly worse. To complicate things further, I was also told that due to a fluctuating haematocrit and low EPO levels, I may be masking yet another branch of the condition called polycythaemia vera (PV), which affects the red blood cells. In Summer 2020, I was told that PV was now the most likely diagnosis and that due to a persistent rise in haematocrit, I will need to start regular venesections – a process whereby blood is frequently drawn in an attempt to keep the overproduced cells under control. I also had an ultrasound on my spleen as an enlarged spleen is very common with this condition as are night sweats, itching (particularly after a hot shower) and bone pain, thankfully all of which I am yet to experience.

Part of the difficulty of this condition is the uncertainty of it all – the exact diagnostic branch, the prognosis, the treatment path. While I feel very blessed to not have a terminal illness, I do find that being monitored every three to four months, and having the anticipation three times a year of waiting to be told whether the cancer has progressed and that, as a result, cytoreductive treatment must begin, is a torture in itself. Due to the rarity of the condition, so much is unknown about it, and therefore it’s very difficult to constantly be told that they have no idea what has caused it, they don’t know how to cure it and they aren’t even sure what is currently occurring or what will occur in the future within the body.

Being a young cancer patient, I hear all the time how well I look. People assume you can’t have cancer or be unwell if you still have all your hair and aren’t stick thin. This is such a myth. If only people knew how ill I felt most of the time, they wouldn’t base my suffering (or lack of) on the amount of make-up I use to cover the pale skin and black eyes.

Migraines and fatigue have been my biggest battles. After suffering three to five migraines per week over a long period of time, I finally had an MRI and saw a neurologist who provided me with beta blockers. These have helped with my migraines massively but have provided other side effects which have added to the stress of the condition. Being diagnosed with cancer has not only affected me, but my family, my marriage and my work where I have now had to reduce my hours to physically and emotionally cope with the demanding role while battling the illness. My social life has also suffered as I often don’t feel well enough to go through with plans that I have made with friends. Any MPN sufferer will tell you that every single day is a battle with this condition, whether it be physically, emotionally or both. Thankfully, I have a fantastic community, consisting both of fellow patients and professionals, who help me get through my most difficult days. Support is key.

Save the date! World Leukemia Day is on 4th September. Keep your eyes peeled on how to get involved!