Anthony was 51 years old when he started experiencing fatigue, night sweats, repeated chest infections, nose bleeds, and random bruising. After a visit to his GP, he had blood tests and was later diagnosed with Chronic Myeloid Leukaemia (CML). 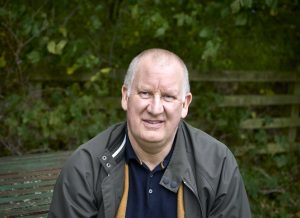 It was around 9 months prior to diagnosis before I started thinking that something was wrong with me, but I kept telling myself it was just old age. I have travelled all over the UK with my job, travelling up and down the motorways takes it out of you, but I was always saying to my wife Val how tired I felt every day and how I couldn’t get rid of these chests infections and the coughing.  At work, I had the nickname ‘Germy’ because I seemed to have a cold all the time. Whether it was warm or cold, I always had night sweats and I mean sweats. My pillow and covers were soaked, during the night I’d turn my pillow numerous times; I’d have to change the bottom cover and wash it every day due to sweats.

Additionally, I started getting nose bleeds walking or driving, in shops. It was embarrassing getting a nosebleed at the counter, paying was a nightmare. They’d tell me how much the shop came to and cue the nosebleed. And then there was the random bruising. I was always wondering ‘Have I walked into something? Did I do it in my sleep?’ It was so weird – one minute I had no bruise and the next I’d look and there would be a massive bruise.

I began developing a worsening chest infection and I had to take time away from work and go home to Middlesbrough, attending a Star appointment on the 15th of December 2017. In that appointment, I was told to speak with my GP, so I made an appointment for the 18th of December 2017. My GP wanted me to attend hospital with my continuing cough; I said no as I had a lump on my oesophagus and feared that they’d only keep giving me x-rays again.

I said to him ‘If the cough is still here next week, I will go to the hospital.’ As I was leaving, he said I’d been a naughty boy as I’d not had my yearly blood test for my high blood pressure. I laughed thinking it was his fault for not reminding me, but his take was ‘don’t blame me you know you have a high blood pressure blood test every year around Christmas time.’ We both laughed as he made me wait behind to see the nurse and get my bloods taken, and truthfully, I had nearly walked out thinking it will be fine – it always is.

On the 19th December I saw my usual GP and he greeted me asking me to take a seat, we had the usual chitchat, and I could see by his face something was wrong. There was a pause and then he continued to say, “you must be wondering why we called you in Anthony”, then another pause. Then there were the words “I’m sorry to inform you that the blood tests have confirmed you have blood cancer.” He couldn’t tell me which type and referred me to my local hospital and told me that he was making me an appointment to go in and see someone in haematology. I just looked, didn’t know what to say but at the same time knew I had to say something. My GP asked me if there was anything I’d like to ask. I looked up and said, “with my cough do you think I should pop into Tesco’s and get some cough syrup?” It was a lot to think about. A million questions in my head but I didn’t know how to ask them. So yeah, the cough syrup came up, but we did both laugh over it.

This is why I think the Spot Leukaemia campaign is important as it’s a hard illness to spot. The symptoms can be put down to anything, such as old age! To me, anything that can raise awareness has to be a plus as some people don’t have bad symptoms so don’t realise they have leukaemia.

On the 23rd of December, I made my first visit to the Haematology Department at the James Cook University Hospital. Although I was basically told on the 19th of December 2017 that I had a form of blood cancer, I had no idea what that was or what it meant.

Driving home from the surgery, all I could think about was what to tell my wife; I ran over hundreds of scenarios on how I would start that conversation. And what a conversation this would be, I’m always joking about and my wife would always take what I said with a pinch of salt. So, when I pulled up outside my home, I looked through the window to see if she was there waiting. Getting out of the car to the front door was one of the longest walks I have ever had.

With a big breath, I opened the door and walked in, and there was my wife waiting, looking anxious. I told her what the doctor had said, and she said “stop messing about tell me.” When I said it again, my wife’s face turned from normal healthy pink to white in a nanosecond, then her tears came flooding out. It nearly brought me to tears, but how could I cry? I had to show strength and hope it would go away. She asked me so many questions I couldn’t answer, her mind was running in overtime, but she eventually calmed down and it all went quiet. I looked over and could see her red eyes from tears.

Believe me, we had some sleepless nights waiting to go into hospital. I never contacted the hospital, thinking it was all arranged until my sister-in-law rang them and then they made me an appointment.

I thought because it was Christmas, let’s wait until afterwards – what difference can another few week’s make? But my wife and sister-in-law were determined. I was told I had chronic myeloid leukaemia on the 23rd of December; I had a bone marrow biopsy to confirm it on the  27th of December 2017, and a kind nurse came in especially to do it.

I googled lots of stuff about CML and before I knew it, I was dying and only had weeks to live. But I quickly learned that so much of that information was outdated! 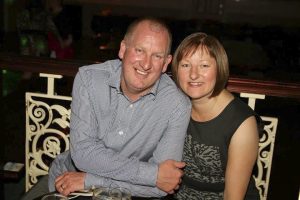 I love Christmas! Having spent some Christmases away, it’s family time I cherish and enjoy. But this changed everything; I was quiet and I didn’t drink, just sat there watching my family: my wife, my daughter and our two grandchildren.

We went out for Christmas dinner; I drove instead of getting a taxi. I didn’t feel like drinking, I really didn’t feel like doing anything, but I had to try for my family. So, for that day I made that effort to enjoy everything as if it was my last Christmas; if it’s my last I want it to be a good one.

Christmas day came and went, boxing day was a long day knowing I had to go into hospital the next day, and I again foolishly googled a bone marrow biopsy, then instantly regretted having done one. The 27th of December came I sat there nervously waiting to have my biopsy, but I won’t go into that as I think most of us know how that part goes.

Over the next few sleepless nights, my mind was only thinking about what leukaemia I had, was my doctor right? On the 2nd of January 2018, my doctor confirmed I had CML.

In a way, that was a relief; it settled me more and I felt at ease knowing.

The biggest thing that sticks in my mind is when the doctor told me to forget the Old Anthony Cornwell, ‘he’s gone.’ She said to start off as the new Anthony Cornwell as life may be a bit slower now.

I’m still undergoing treatment and I started with Imatinib, but that didn’t reduce my BCR-ABL enough and was slow, so they took me off that. I was then put on Nilotinib, now that came with really bad side effects; there was way too much itching all over my body which was hard to tolerate, so that was stopped. I’m currently taking Dasatinib 100mg, which is going well and my BCR-ABL from May 2021 is 0.000054% when at diagnosis I was about 68

I have been asked and told:

My Journey With Leukaemia Care

During the first stages of my diagnosis, Leukaemia Care’s services really helped me. I used Leukaemia Care’s helpline mainly when I was in the first stages of diagnosis and used it for help on what to expect. When asking questions, the nurses on the other end were good at giving as much information as they could, speaking calmly to you to make you feel at ease and in the early stages that’s what you need: calmness and no panicking.

I always read the personal stories of others in Leukaemia Care’s magazine, Leukaemia Matters, to see how or what other patients went through. It’s interesting to see their journey through it all and how long they have had leukaemia, to see if they have tips, I know they may have a different leukaemia but if there is a tip or trick there then I’m all ears.

I still have Leukaemia Care’s booklets from when I requested them; I keep these as reference material. I’d rather read the booklet than google and to start off with I read cover to cover, learning abbreviations, medical terms, names of places for assistance.

Additionally, I enjoy watching the webinars and seeing the questions in the chat. It just shows how many people feel the same! Although each of us is different, side effects are the same in some areas. Take the fatigue webinar in October (I’m always so tired), the 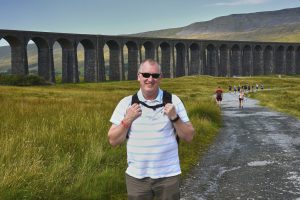 webinars are well explained and explained by professionals, I like them. They carry a lot of useful information for leukemia patients.

I first joined the HealthUnlocked forum in April 2018, I actually think this was given to me on the Facebook social media CML page run by Nigel Deeks & Chris Griffin. When I do log in, this is a place I look to see up and coming webinars, look at others posts see what is out there to do with my illness, CML.

Personally, I think all the above have some value in some way or another, they always give patients a place to go to, to either have a read, a catch-up, or a good old whine and meet others with the same issues and to learn from each other!

My advice for all leukaemia patients would be: Don’t google your illness!

In 2022, we are asking 365 of you to donate your birthday to raise funds for Leukaemia Care