Like many parents of children with leukaemia, and like many leukaemia patients themselves, Tasneem initially thought her son’s symptoms could be attributed to the everyday. However, Tasneem, a GP herself, soon realised something was wrong with her son Yusuf. She was right – Yusuf was diagnosed with acute lymphoblastic leukaemia on World Leukaemia Day. Here, Tasneem tells her son’s story. 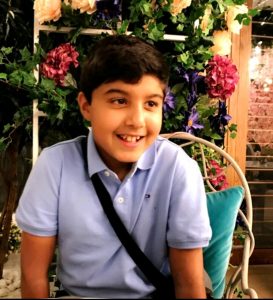 My son, Yusuf, was diagnosed with acute lymphoblastic leukaemia (ALL) at age 11.

During the summer holidays in 2019, we had a wonderful time, attending many family events all over the UK, experiencing excursions in all sorts of places – completely oblivious to what was going to unfold. 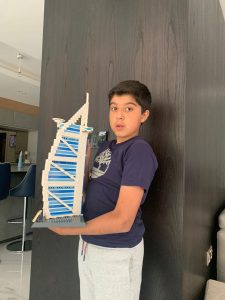 Yusuf displayed no signs of being unwell at all in July 2019. In August, he started losing his appetite. I didn’t take much notice initially and thought it was due to all the activities we were doing, being out of a normal routine and warm weather. One week before his diagnosis, he went white water rafting and spent a day at Longleat Safari Park that he loved.

However, as we progressed towards the latter weeks of August, his appetite worsened and I noticed some sinus congestion in the mornings, which again was something he would often experience in the summer months. In the last week of August, when we were home and preparing for the start of high school for Yusuf, he developed slight nausea intermittently after eating meals. I cooked his favourite meals and he just wasn’t interested. My maternal instinct told me there was an underlying cause driving this new pattern; Yusuf had never previously been a picky eater.

At no point did he become noticeably unwell and didn’t experience any fever or have any infections. The last time Yusuf had even had Calpol was probably during his infant years. He had always been such a well child.

I made an appointment with Yusuf’s GP who, after taking a history and examination, tried to reassure me that all was well and perhaps his appetite and slight nausea was due to his sinus congestion. There was no abnormality to find on examination. I work as a GP myself, and as a doctor I could see how she came to her management plan given the short history and no clinical findings. However, as a mother I knew there was something more serious; I knew my child, and this was very out of character. Parental concern is always a red flag for me in general practice.

I asked for some blood tests to be done. The children’s phlebotomy clinic could only schedule him in in three weeks’ time. I felt panicked – I couldn’t wait three weeks to find out what was wrong with my child’s body. I asked Yusuf’s permission and performed blood tests on him myself and took them into work the next morning. The nurses very kindly added them into our surgery bloods ready to be sent to the lab.

The same day at 3pm, I had a call from the secondary school we all wanted Yusuf to attend. He was so happy. As the day went on, I received no phone call to say the blood tests were abnormal, so I felt relieved. Surely if something was hugely abnormal, the lab would have called the results through.

That night Yusuf was OK, just didn’t eat much and went to bed as normal. At 9:30pm we received the dreaded phone call. The on-call doctor asked us to take Yusuf into hospital immediately and that the blood tests had showed something seriously wrong. If any parent reading this has experienced something similar, they’ll know how harrowingly painful such news is.

I woke Yusuf, who was fast asleep in bed, and took him to A&E. The on-call doctor that night was a specialist paediatric oncology registrar. He told us that Yusuf’s blood film showed blast cells. This was a sign of leukaemia.

This was 4th September 2019. I was completely oblivious that this was World Leukaemia Day. Yusuf’s diagnosis was confirmed with a bone marrow biopsy. 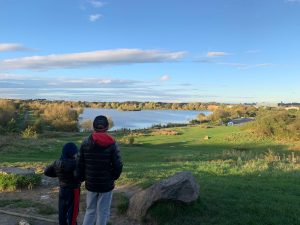 Yusuf finds comfort and peace being outdoors amongst nature and goes for long walks and cycling with his siblings.

To say we were devastated is a huge understatement. I felt numb and couldn’t process the information. How do I explain this to Yusuf? We were going to start high school, not chemotherapy.

Yusuf was wheeled onto the oncology ward immediately with the words ‘Teenage Cancer Trust’ written everywhere. He was reading all this. He’s a very bright boy, so the thought of answering his questions was killing me.

ALL can progress and advance aggressively. On his admission bloods, even his blood count hadn’t been affected, so I was told that they suspected it was early stages. Yusuf was experiencing his subtle symptoms because the leukaemia had started attacking his kidneys. Within hours, we were started on treatment and told that this would cause a very rapid breakdown in cancer cells that his kidneys would not cope with. So, within 24 hours of being home in his bed, he was taken in a blue light ambulance to Nottingham Paediatric Intensive Care.

The first six months was very tough, and he became critically unwell at times due to infections and other adverse effects. Two years later, he is now 13 and still going through chemotherapy. His body finds it tough coping with the toxic adverse effects. We still have 16 months to go, and even though we have a fair bit of travelling to do on this journey yet, each day takes us closer to the end of his treatment.

Sending love to all those children fighting similar battles.

Today for Mothering Sunday, we’re sharing an update from the Ali family. Tasneem Ali, mother of Yusuf Ali, shares an update on Yusuf’s acute lymphoblastic leukaemia (ALL) treatment and what their experience has been like during the pandemic.

My son Yusuf is being treated for acute lymphoblastic leukaemia (ALL) and I hope and pray that we are in our final 12 months of chemotherapy of over a 3-year treatment plan.

It hasn’t been easy. Every child going through this has a different experience and is faced with challenges that affect them. His bone marrow is very tired from the constant assault of the drugs, but we’ve got to keep going. Last month his consultant said, ‘Yusuf we’ve got to try and overcome these issues the best we can to ensure you never need any chemotherapy again!’ I pray so hard that this will be true for us.

Yusuf is approaching his 14th birthday and when he was first diagnosed he was 11. He has never experienced secondary school feeling ‘normal.’ There are many things his health prevents him from doing but he accepts this very gracefully and tries his best in achieving the best he can at school.

COVID-19 has been an anxious time for us just as it has been for other blood cancer sufferers. We have tried to protect Yusuf fiercely for the past 2 years but unfortunately, we all contracted it last November. Fortunately, Yusuf was the least affected of us all and even joked that Covid-19 had treated him kinder than other viruses, which almost always send him into hospital!

Covid-19 has helped us in other ways though. At the start of Yusuf’s treatment having remote lessons from home was not possible and he missed a lot of school. If he is not well enough to be in school now, thankfully he can join remotely most of the time.

Living with chemotherapy has normalized within our home. We have all had to change the way we live to keep Yusuf safe. We make a huge effort in ensuring our home is kept as clean as possible to prevent any possible virus transmission. We base our meals around how Yusuf is feeling. Some weeks his treatment is more intense and he is unable to eat normal meals so we adapt to lighter meals. His younger siblings are also very patient when we don’t attend functions, gatherings or places that we used to go to.

Any sacrifice we make as a family doesn’t even come close to what Yusuf’s poor body has had to endure. I admire all the kids that go through these treatments so courageously and their parents for always looking so brave. I must admit I don’t feel so brave a lot of the time but we get through by focussing on the light at the end.

Sending love and prayers to all.

We're saying thank you for the invaluable role that Clinical Nurse Specialists (CNS) have in a leukaemia patient's journey. We want CNSs to know that they matter to patients, to charities and to other healthcare professionals.