Ross was 20 in 1986 when he suddenly began to feel fatigued and short of breath. He put this down to a lack of fitness, but it soon became apparent it was something much more serious. Now 34 years on from diagnosis, Ross is sharing his story to give hope to others.

In November 1986 I was running for the bus home from work. Unusually, I was very short of breath, but aged 20 I just thought I was out of shape.

Things deteriorated quickly—by the beginning of the next week I was off work. Having got more tired and now in bed, my mother called the GP to the house. As he was about to leave, Mum insisted that he do something as I was deteriorating quickly over a short period. The doctor then arranged for a chest X-ray on the Friday of that week at the local hospital.

I went for the X-ray and had just got back and into bed that afternoon when the GP arrived at the house. He thought I maybe had pneumonia or pleurisy—one of my lungs was full of fluid.

As a result, I was admitted to Crosshouse Hospital in Kilmarnock for tests. On the Saturday I was moved to a side room (never a good sign) and then on Sunday 10th November 1986 I received my first bone marrow test.

Having been told nothing at this point, I thought this to be slightly weird—and worrying. Bear in mind that in the 80s, leukaemia was a big bad word that the general public didn’t know much about apart from the occasional sensationalist reports in the tabloid press. The internet was in its infancy, and social media was almost nonexistent. So, I put the lovely Dr Erskine on the spot and, while he was washing his hands at the sink, I asked him what was going on.

Reluctantly, he told me I had acute lymphoblastic leukaemia (ALL).

Various bouts of chemo followed, and my brother was tested for a potential bone marrow match, but without success. Christmas was spent in hospital in reverse barrier nursing. Happy days! Later, I was told that in the January I would be lined up for an autologous transplant (using my own marrow). My bone marrow was harvested ASAP, then a treatment plan was put into action.

At the beginning of January 1987, we headed up to Glasgow by car, unfortunately getting stuck in snowbound traffic for one and a half hours. Arriving at Glasgow Royal Infirmary, blood tests were taken, and I found out that I had picked up an infection. The transplant was on hold, and so I returned to the Crosshouse for further chemo.

Time moved on and in March it was all systems go. Myself and two other patients were going for radiotherapy and the transplant at the same time.

Next step was more chemo, stronger stuff this time. My reaction to this was not good—I had a seizure and twisted my back. This delayed the radiotherapy for a day, but it was still all systems go as the chemo would take effect soon. So, it was off to another hospital, this time on my own, across the city for three days intensive radiotherapy.

Back to Glasgow and the bone marrow transplant (BMT) on 31st March 1987. Another seizure, which meant I missed the biggest event of my life up to that point.

The whole process is a bit of an emotional roller coaster, but with help from friends and family, and a lot of luck, I managed to pull through.

Overall, I was off work for 1.5 years, returning part time initially. I completed college, having taken some time out. Socially at the age of 20/21 it was difficult to get back out and about as friends move on as normal. Gradually, everything gets back to a ‘new normal’. I got married in 2002, and we are both living in sunny Troon by the seaside.

Jump forward to today, I no longer attend hospital, but still have annual blood tests. It takes a long time to get to this stage, and latterly hospital visits were more of a social thing for both me and the nursing staff.

For anyone on this torturous journey, believe me, there is hope; there is always a chance no matter how ill you are and feel, anything is possible. Approaching 34 years post-transplant, I think it’s important to shout from the rooftops that it is possible to get through the treatment process. It has changed immensely since I was involved (thankfully) and the success rate is also much, much higher. Believe in yourselves when things are bad, believe in your family and friends, and you can get through this. 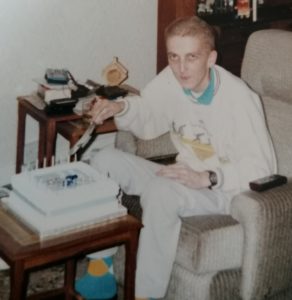 Ross on his 21st birthday

What is campaigning and advocacy?

As a charity we are actively involved in campaigning on behalf of patients and their carers, which we feel is an important part of the work that we do. We are passionate about doing everything we can to improve the experience of patients throughout their cancer journey.