Richard was just 35 when he was diagnosed out of the blue with chronic myeloid leukaemia (CML) in 2019. Treatment was going well, but when he began to feel feverish and fatigued, he knew something wasn’t right. What followed was a shock diagnosis of acute lymphoblastic leukaemia (ALL) just a year after his first leukaemia diagnosis.

In August 2019, our lives were turned upside down after I went for a routine optician appointment. The optician spotted haemorrhages in both eyes and suggested I see my GP for an overall health check.

I arranged this for a few weeks later, but as I had no other symptoms, there were no particular concerns. My GP sent me for a blood test just to be certain, which I had at my local hospital.

My GP was shocked when the blood test results came back. I had a call later that night asking me to go back to hospital urgently the next day. They explained that I had suspected chronic myeloid leukaemia (CML), and they did a bone marrow biopsy. A week later, CML was confirmed, and I started on imatinib.

At the time, I wasn’t aware of any other symptoms, but in retrospect, there was likely weight loss, fatigue and night sweats. However, I put all this down to warm weather and a busy work life at the time. Thankfully, these days CML can be well controlled through oral chemotherapy drugs like imatinib. However, the side effects, especially at the start, were really tough – lots of bone aches and fatigue. I was also diagnosed a week before our son unexpectedly arrived 11 weeks early. Our son, who will be two this summer, is doing well, but dealing with the CML diagnosis, side effects of medication, all while we coped with our little boy spending nine weeks in neonatal intensive care, was a difficult and stressful time for me and my wife. We relied massively on our family and friends for their support, for which we will forever be thankful.

The positive news was that CML quickly became a manageable part of life. I tolerated the drugs well, feeling better and living a normal life, with some physio to help manage leg aches. Lockdown kicked in a few months later, when I shielded but otherwise was in the same boat as everyone else. My test results moved in the right direction each quarter, and things were under control.

Then, at the end of June 2020, I had a weekend where I felt feverish and achy. Initially I put it down to a bug and the uncomfortably hot weather, and I booked a COVID-19 test (which came back negative) back when they were still a novelty. The high temperature persisted and, ultimately, I went to my local A&E on my clinical nurse specialist’s (CNS) advice, where I was admitted to hospital.

The outcome of a long few days of tests and a bone marrow biopsy was that the original CML had gone through a ‘blast crisis’ phase and transformed into acute lymphoblastic leukaemia (ALL), which was extremely unexpected and unusual, particularly when I’d been responding well to the CML medication. ALL is most commonly seen in young children and much older people, but is particularly rare at my age, making it even more unexpected.

It was a huge shock, and I was swiftly transferred to University College London Hospital at the very start of July 2020 to begin a month of chemotherapy.

It became clear very quickly from more detailed tests that the aggressive nature of the leukaemia meant that the best chance of long-term management and cure would be a stem cell transplant. As I started my chemotherapy, my siblings were tested (and were both ultimately half-matches). The transplant team started a search of the international bone marrow registers to see if a full match could be found, knowing that a half-matched sibling would be a good next choice.

Due to the pandemic, I was in total isolation and couldn’t have any visitors for most of my first month in hospital. The first round of chemotherapy was tough because of the sheer shock factor and isolation, although generally I felt relatively well for most of the first month. I was massively reliant on video calls, Netflix and friendly nurses to help keep me sane! I also started writing a blog of my experience, which helped me communicate what was going on to family and friends, after I quickly realised individually responding to everyone’s ‘how are you’ messages was exhausting.

After the first round, I was able to go home for a couple of weeks before heading back to hospital for another six weeks of treatment. The chemo was more full-on during this period, and I suffered a lot more side effects, including infections and pleural effusion (fluid on the lungs) making it a tough period; however, being able to see my family more when I wasn’t in the hospital was a huge benefit.

Towards the end of the second round of treatment, I was told, with great relief, that the transplant team had found a fully matched donor in Germany. My stem cell transplant was booked in for mid-November 2020, after five weeks at home building my strength back up after the last round of chemotherapy, and some much-needed quality time with my family. The build up to transplant was a particularly scary time – we were 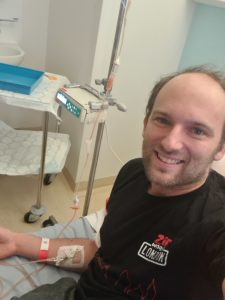 given a huge amount of information about the impact, side-effects, risks and chances of success – to ensure we were as well prepared as possible.

I headed back into hospital in mid-November to begin conditioning treatment ahead of my transplant. During this time, my highly weakened immune system alongside the pandemic meant that hospital visits were limited to one person, once a week for two hours (an improvement on the first round), so I at least was able to see my wife in person during treatment.

The transplant itself (Day 0) was a little like having a blood transfusion, and after all the preparation the procedure was actually fairly low-key. Saying that, it did feel like turning a corner – this was all about a cure and building up from that, rather than purely treatment with chemotherapy to keep things under control. It had also been clear from the start that my strain of ALL was unlikely to stay away for long without a transplant.

The transplant was then followed by a waiting game to see a glimpse of my blood counts starting to creep up to show that engraftment was starting to happen. While I’d tried to keep as active as I could throughout treatment, fatigue really set in around this time, and for a few weeks managing a shower was the main achievement of the day whilst I remained in isolation in hospital.

Much of the time post-transplant was, and still is, ‘watching and waiting’ to see how blood results go. On Day 12 post-transplant, my blood results started to indicate a small upward turn and began their very slow movement. At Day 20, just under three weeks post-transplant, and four weeks in hospital, I was discharged to be reunited with my family and begin the recovery journey at home.

Since then, I’ve been monitored initially weekly, then fortnightly. My blood results have overall been on a slow upwards trend, with lots of transfusions initially. At the three-month mark, I had a bone marrow biopsy which showed that I was in remission with no observable trace of leukaemia. I’m continuing to be monitored and have just passed the six-month mark, which is showing the same result. It’s a long road to recovery, and I’m slowly building up my strength, ensuring I try to stay active (having a nearly two-year-old at home helps!). I have the support of my amazing wife, who is an absolute hero, along with my family and friends. I still maintain the blog to keep people updated on how things are going, and have been encouraging people to sign up to the bone marrow register to have the opportunity to give someone else another chance at life, the same way my donor did for me. I’ve also attended a number of Leukaemia Care online ALL support group sessions. It’s been really helpful to share stories and experiences with others going through their ALL journey (especially given its rarity for people in their 30s and 40s). I’ve been able to help someone preparing for their own transplant with some of my practical experience, and it’s been great talking to others who understand the treatment and haematology ‘language’, and have their own stories to share.

I recently had a fever and infection which put me back in hospital for five nights – a stark reminder that it is still early days – but I’m determined to keep fighting, with a smile, and continue the steady march towards normality.

Here, you'll find lots of resources to help you whether you're a patient, carer, fundraiser or medical professional.