Rian Harvey was just 14 years old when he was diagnosed with acute myeloid leukaemia (AML). Following a long road to diagnosis, and a relapse just a year into his first remission, Rian has now thankfully been in remission since 2016, and he's on a mission to raise awareness of leukaemia.

“March was the ‘remission anniversary.’ We had set aside a meal with family and friends to celebrate how far we had come since I was in the hospital a year ago. I remember going to that meal; I felt like a fraud. Here were all these people celebrating my remission of one year whilst I sat there certain I knew it was back, but I didn’t tell anyone.”

It was the beginning of my summer holidays in July 2014 when I first started to have symptoms. To say I noticed them wouldn’t be true, but I remember vividly; I was staying over at a friend’s house for a sleepover. We had watched a film and gone to sleep that evening as normal. I remember waking up around 3am absolutely drenched in sweat. I brushed this aside; it was summer, and I was a teenager. We sweat. Why should I be concerned?

Next came light-headed spells. I had a few of these dizzy spells, feeling as if I might pass out and not right. Again, nothing to worry about. I was a teenager. Hormones maybe?

Then came the fatigue. Not having the energy to do things. I was always an energetic kid, yet I was cooping myself up in my room, almost as if I was isolating myself, which is odd when you think about it. Animals are known to do this when they aren’t well; maybe it was my mental reaction to knowing deep down something wasn’t right? Who knows?

My mum, however, knew something wasn’t right when we were camping, and I refused to go on a bike ride with my stepdad because ‘I couldn’t be bothered.’ I remember getting quite emotional about just saying no. This, for mum, was when she started to realise something was up.

Weight loss had quietly persisted throughout the summer holidays, undetected. What’s wrong with losing a bit of weight? Loss of appetite, night terrors, panic attacks and a leg infection were the last symptoms to rear their heads. This happened in the three weeks before I was diagnosed. Three weeks which were scary, dark and unsettling.

I finally gave in and went to the doctor when my leg had become sore. It hurt and felt like it was on fire. It had swollen up and felt very stiff as if maybe I had some kind of muscle injury. This got worse and worse over a week before it got to the point where I was unable to walk properly. The leg pain, coupled with everything else, was cause for alarm. The doctor saw me and thought it was nothing but a muscle injury. He sent us off with a cream to rub in and told us to come back if it didn’t get better. Of course, it didn’t. A week later, more unwell, more night sweats, night terrors, panic attacks in the middle of the night, lightheaded spells, fatigue, not eating, throwing up every morning, paler than ever… and we were back in the doctor’s room. This time he referred me, after a bit of pushing, to the X-ray department at the local hospital. He wasn’t convinced it was a broken bone, but it was best to check as I was showing signs of infection. The next morning, I woke up, hobbled out of my bed and went to get my X-ray with Mum. I never returned that day because, after the X-ray, Mum dragged me to A&E to get checked, where a blood test later revealed I had an infection in my leg, I was heavily anaemic, and the consultant admitted he was sure I had leukaemia.

Eight weeks before I was checked. Eight weeks that could have been fatal had Mum not taken me to A&E.

The first week was tense. Once in Southampton, my health continued to deteriorate. It was soon discovered that the swollen leg which had taken me to A&E had developed into an infection within my hamstring; this had then further developed into sepsis. However, I couldn’t start any form of treatment for the leukaemia whilst this infection was ongoing. Soon, I was being rushed down to theatre. My parents were told to prepare for the possibility of me becoming a potential amputee. I am thankful that I arrived back on the ward having been ‘cleaned out’ successfully.

Six months of intense chemotherapy followed this. I spent Christmas in hospital and had a four-hour nosebleed Christmas morning. It was tough, I can’t lie, but it helped me grow as a person. By January, I was discharged and allowed home to begin the hardest part of treatment in my eyes – post-cancer recovery. I was always told that I would most likely start to reflect after being through it all. Whilst you are on treatment, everything is so fast-paced you do not have time to digest what is going on.

After that, life started getting back to normal – until the next Christmas. I started to notice a few symptoms again. I was off my food. I started having various nosebleeds. Fatigue kicked in, a few night sweats. If I am honest, I knew in January that I had relapsed. I didn’t tell anyone. Why? I was terrified of what that meant. It is stupid now when I look back; I was putting my own life at risk. I remember getting a cold that just did not go away. Mum took me to the hospital to get a blood test. They could not get any blood. I remember telling Mum I wanted to go home and reluctantly, after an argument, she gave in and we left untested. The hospital said just to monitor it.

I remember one of my friends telling me I looked ‘paler than usual’ and I got defensive, telling him it was the winter and what did he expect? Of course, I wasn’t angry at him. I just didn’t want to accept what I knew was happening. My cancer was returning.

March was the ‘remission anniversary.’ We had set aside a meal with family and friends to celebrate how far we had come since I was in the hospital a year ago. I remember going to that meal; I felt like a fraud. Here were all these people celebrating my remission of one year whilst I sat there certain I knew it was back, but I didn’t tell anyone.

Holding onto a lie breaks you down. I woke up the next morning with a swollen lymph node and a big blood clot in my mouth. I spat it into the bin and walked into the kitchen. I took one look at Mum as she said good morning and I burst into tears.

Mum was as positive as ever as Dad and I went to the hospital to get checked. I remember sitting there with Dad in silence. The anxiety I thought I would have was gone. I think I felt more relieved that I was no longer lying.

My consultant sat us down in a room, and before he spoke, I said, “I know.” He told us it was back. A bone marrow transplant would be needed and, as I didn’t have any full-blood siblings, it would need to be unrelated. Tests started to ensure we found the right mat

Rian on the day of his transplant

1st July 2015 was the day I had my transplant from an unrelated donor. A lifesaver.

I was discharged six weeks later. What happened next? I got depressed; I suffered from what I had been through. For five years, I pretended none of this happened. I deleted all my pictures that showed I had had leukaemia. I pretended, for as much as I could, that this was a lie and it never occurred. Did it help to do that? No.

Locking up your past and putting it to the back of your head without going through it and digesting what it taught you is as good as putting a time bomb in there. It began to eat away at every aspect of my life.

As the pandemic swept through the world in 2020, it stopped everything, including me. But there was a positive to it – it gave me a chance to accept, digest and understand my past. I am thankful for that.

I am deemed as ‘in remission.’ Now I have accepted everything, and I use it to help others. Not only people living with cancer but people in everyday life. In a weird way, cancer is one of the things in my life I am most grateful for. I certainly wouldn’t be where I am today without it. 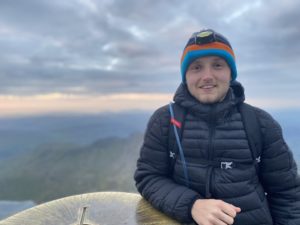 This involves working with bodies such as the National Institute of Clinical Excellence (NICE), the Scottish Medicines Consortium (SMC) and the All Wales Medicines Strategy Group (AWMSG) to ensure that the views of patients are taken into account when making decisions over access to drugs and treatments.