Like many others diagnosed with leukaemia, Paul could easily explain away his symptoms. It came as quite a shock, then, when he was told his back pain and fatigue were all due to acute lymphoblastic leukaemia (ALL). Here, he shares his story as part of our Spot Leukaemia campaign. 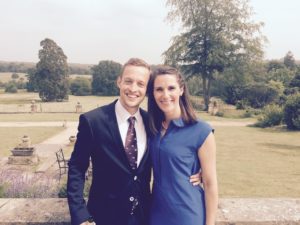 To say that my diagnosis was a surprise is quite an understatement. I was a seemingly healthy young professional with a young family and the dreams that go along with that. However, I had been suffering with various ‘niggles’ for about three or four weeks. I had attributed my symptoms, though, down to various things and felt that I could explain each one. My symptoms were: severe pain in my back and leg, which originated in my right side but moved over to the left after a couple of days (I spent my Christmas and the end of my New Year’s Eve celebrations lying on the floor with my feet up on a chair because it was the only way I could be comfortable even with pain killers). I also had tiredness and weight loss. I put the back pain down to moving boxes and furniture ready to move house, the tiredness down to having a young daughter, and the weight loss to recently taking up cycling to and from the station. To then be told that I had acute lymphoblastic leukaemia (ALL) was like taking the floor away from under my feet.

My GP was excellent, and without her things may have been different. I first went to her with my back problems, and she gave me pain killers but also told me to come back if it didn’t settle down. It didn’t, and so I went to see her a second time. This time I told her of a symptom that I had when I first saw her but I didn’t mention it because I didn’t think it was relevant. The fourth symptom I had were night sweats, which, I have learnt, is a common sign of leukaemia. Luckily, this set off an alarm in my GP’s head. I was immediately sent to have x-rays and blood tests. I won’t forget the look on her face when she told me I had leukaemia. I was a seemingly healthy and fit 30-year-old being told that I had leukaemia. That was Friday 3rd January 2014.

I couldn’t hide the fact that there was something seriously wrong when I got home – my wife spotted it straight away. Alexa was in the middle of bathing our daughter Ella, but I told her to carry on like nothing was wrong and I broke the news to her once Ella was in bed. She was understandably stunned.

I was first seen in Maidstone hospital, on the following Monday, where I was told that I had a form of acute leukaemia, but they weren’t sure which one until they were able to take a bone marrow sample. The doctor described me as clinically well and so I was allowed to go home before going up to Kings on the Monday. That meant that I was fortunate to have the weekend to tell my family that I had leukaemia and to spend some time with Ella before I had to contemplate my treatment. I asked my parents to come to my house and I spoke on the phone with my two elder sisters. This was one of the hardest things I have ever had to do and was made harder because we lost my brother, John, aged 27 in 2004 to cancer. I felt so guilty and sorry that I had to tell my family that one of their children/their brother again had cancer. It was heart breaking and I still feel guilt that I put my family through it.

On Monday 6th January, Alexa and I travelled up to Kings. All I had with me was a piece of paper with my consultant’s name on it and an overnight bag packed, and all I was told was to head to the haematology day unit. I nervously went to the reception desk and told them that I had no information other than to ask for a Debby Yallop. To my surprise, the receptionist looked up and without checking any of her paperwork asked if I was Paul Phillips. I confirmed and she immediately bleeped the team. I didn’t even have the chance to sit down before Debby came out and took me straight into her room.

There, Debby talked me through what ALL is, I met my clinical nurse specialist Orla, had a bone marrow sample taken (which I likened to being in a rugby scrum), and was booked into the family planning clinic to store sperm. My Kings journey formally started on 12th January 2014. This, however, was an ordeal to say the least. It turned out that I wouldn’t be returning home until after my birthday in early April.

I went in weighing 11.5 stone and came out as an almost unrecognisable eight stone shadow of myself. In that time, I was subjected to many intrathecal injections, had countless bags of luminous toxic chemicals, blood 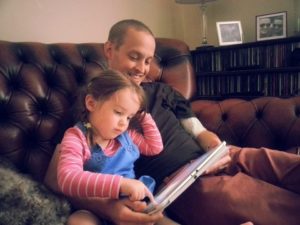 transfusions, diarrhoea, bouts of gut-wrenching vomiting, lost my hair and gained a moon face from all the steroids. My body had taken a battering and I was only a small way into my treatment.

In that period, I had my saddest moment. It may have been about halfway through my stay when Alexa, Ella and my mum came to visit me. I was neutropenic so was not allowed off the ward, but I was allowed to go to the family room to see them. The family room was invaluable to me because it meant that I could see my little girl. However, on this occasion I knelt down to give Ella a hug and when I tried to stand up whilst still holding her, my legs were not strong enough and I tumbled backwards. I had lost so much muscle that I couldn’t do something that I had previously been able to do without thinking. It shocked me and upset me, so much so that I had to go back to my room and cut the visit short. It was the first realisation that I was seriously unwell.

I did, however, also have one of my happiest moments early on too. I learnt on 12th February 2014 that the first round of treatment was successful and I was now in remission. The difficult part, I was then told, was to come, and that was to consolidate my position and to keep me in remission. Going into remission so early on was a massive morale boost and I was determined to maintain it. 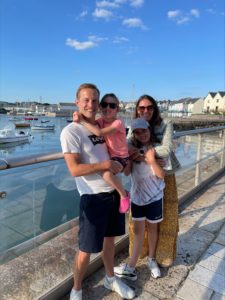 After nearly a year and half of treatment, I started my return to work. My firm were very good to me, helping me financially longer than they were legally obliged to and keeping my job open. I went back to work in June 2015, and for the first three months I went back initially two days a week. I increased my working hours by one day a week every three months until I was back full time. For just over a year of my return to work, I was still on daily meds and every three months I would go to Kings for further top-ups. One sign that I was getting better was the length of time that I was now spending in the waiting room of the chemo day unit or the haematology day unit. I was no longer the unusual case swept ahead of everyone in a celebrity fashion, I had to wait like everyone else. There was even one time when I came up for an appointment, my team had forgotten I was coming up! Strangely, I felt reassured by this.

Throughout my treatment I was determined to not let it get me down, and I was happy to talk about it. By being open to discussions about how things were going, I hoped to make people feel comfortable so that they could act normally around me. If I was relaxed, my friends would be relaxed too. I don’t recall ever feeling scared, I was just focused on getting better for my family.

On that note, I finish off by telling you who I am now. I am back at work full time, achieved my promotion and undertook the building work on our house. The extra bedroom was necessary because we welcomed into the world another bundle of joy in March 2017: Remi Ada. She signifies how far we have travelled as a family, and we love her to bits. I can now say that, after nearly six years of being under the care of King’s Hospital, I was discharged on 11th October 2019, with a clean bill of health.

You may feel a mixture of emotions following a blood cancer diagnosis. We’re here to help you cope with the emotional impact of being diagnosed and living with a blood cancer.