Abbie was eight years old when she was diagnosed with acute myeloid leukaemia after a series of infections. As part of our Spot Leukaemia, Abbie’s dad Paul is sharing his daughter’s story, along with his advice for other parents of children with cancer and Down syndrome.

In October 2017, Abbie, who is eight and has Down syndrome, was admitted to hospital with cellulitis around her eye. They diagnosed her as neutropenic, which is having low neutrophils, a type of white blood cells.

In December she had her appendix removed, and at the start of January she caught the flu. She also got an infected finger, for which she couldn’t fight the infection by herself. This was when doctors looked into her blood levels more closely. We were told there was a chance it was leukaemia, and a bone marrow biopsy confirmed that she had acute myeloid leukaemia (AML). 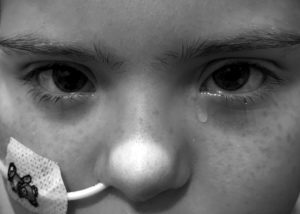 Abbie had to have six months’ worth intensive chemo, having long spells in hospital away from her family and friends.

Around July 2018, Abbie went into remission, and it was not long till she was able to go back to school and start living a “normal” life again.

You can never rest as a parent of a child who has or has had cancer. For us that fear of the cancer returning was always in the back of our minds, every time Abbie would get a cold or not feel well, you wonder if she could fight it on her own.

In May 2020, after another infected eye, we found out that Abbie had relapsed and she would have to beat cancer again. We were given two options:

1. A bone marrow transplant, but because of the condition of Abbie’s kidneys and heart, we were told that she would have a 50% chance of making it through, or;
2. another course of chemo, including a trial drug.

We went for option two. We were told that the first course of chemo would involve approximately a two-week stay in hospital, but this ended up being a much longer stay 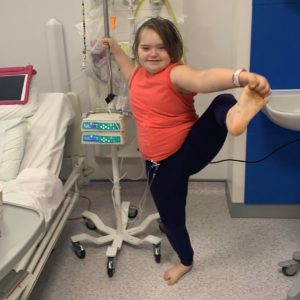 due to Abbie getting a chest infection. This treatment also happened during lockdown, so she was not allowed any visitors, and only one parent could be with her at any one time. There was no school, playleaders, scout groups, giggle doctors, story tellers allowed in at this time; people who helped distract and break up a mundane reoccurring day going through treatment in 2018. 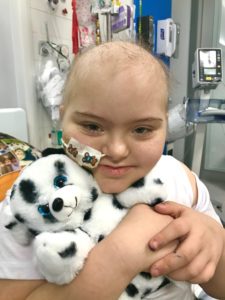 Abbie had her 11th birthday in hospital. Again, no visitors were allowed, but we were lucky to have a room with a view, so some of her family and friends came up with a homemade banner wishing her happy birthday.

Going through this a second time, knowing what was going to happen, we thought it may be easier, but this time seemed harder. Abbie was affected more from the treatment, and we had doctors come in during the night to look at Abbie, something we saw happen to other patients but not to Abbie. Her oxygen levels kept dropping because of the chest infection, which meant often she had to sleep sitting up while on oxygen, and this took a while to clear up. The medicines that were given to her did not seem to work, and the medicine that we had set our hopes on, to clear it up, Abbie had an allergic reaction to. Then abscesses were found in her liver, which complicated matters going forward.

Through all this Abbie conducted herself in a way that was above all expectations. Abbie and a lot of the children seem to suffer from hair loss, loss of appetite and changes in taste, stomach pains, being sick, loose bowl movements, resulting in them becoming incredibly sore. Like all the children in the ward, she dealt with the treatment and side effects like a soldier, but it was her caring nature for other patients, doing them drawings, making them things and holding their hand when they had to have medication, that makes her a true inspiration; not to mention the jokes, pranks and twerking she did in front of the doctors and nurses. 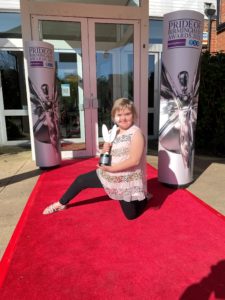 Abbie is again in remission and is doing well. The plan is for her to go onto a daily chemo when the lesions in her liver clear up.

As parents we can only do three things for our children while they are fighting cancer and they are:

1. Comfort them – they will feel rotten at times. The chemo makes them worse and breaks them down so the body can rebuild stronger, so often a hug is a great aid alongside their treatment.

2. Reassure them – we have to tell them that they are doing well and it’s OK not to feel good and not want to take their medicines etc.

3. Distract them – at times the children will feel down, in pain or discomfort, and we cannot make that go away, even though all parents wish they could. However, we can help by taking their mind off things, by talking to them, playing games, or colouring together etc.

Thank you for signing our petition to keep universal access to free lateral flow tests. Your support is highly important for leukaemia patients and will help to ensure people living with cancer have a louder voice. By giving just £5 per month, you’ll be helping to ensure that patients face shorter delays in diagnosis.