Margaret Miller was 62 years old when she was diagnosed with chronic lymphocytic leukaemia (CLL). Now 70, she reveals the stress of being recognised as a clinically extremely vulnerable (CEV) leukaemia patient during the pandemic, and how CLL patients are often the ‘forgotten cohort.’ 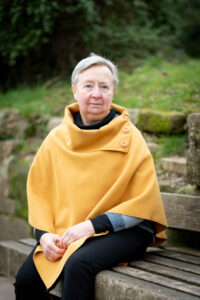 We have a holiday home in France in a very rural setting where we spent quite long periods of time. In early 2014 I had persistent pain in my side so saw the local doctor. This was in a village 9 miles away with 2 doctors for a dispersed community. The doctor was actually Belgian. He couldn’t find anything obvious so arranged for a blood test and ultrasound scans. This was Thursday, I had the blood test Friday and ultrasounds Saturday. After the ultrasounds, I walked out with the various scans and the radiologist’s results to give to the doctor and then keep. Monday morning the doctor rang me to say he wanted to speak to me and within a couple of hours I was in his office where he told me my blood results showed what he believed was CLL (LLC in French). My first question was, will I die? He explained that I would probably have a reasonable length of life and die of something else. He then arranged a further blood test to confirm the diagnosis which was sent off to Lyon. I contacted my doctor in Worcester and emailed my results.

I returned to Worcester where I repeated the blood test and was referred to haematology. The diagnosis was confirmed, and I was handed a Macmillan Cancer booklet on CLL. I was told to get another blood test in 6 months to see how the disease was progressing, avoid infections and to seek medical help sooner rather than later if I did get an illness. I also needed to get vaccinated for pneumonia, hepatitis and to get the flu jab each winter. 6 months later I was back at haematology and as my white cell count hadn’t doubled and I didn’t have any major symptoms, so they discharged me to the care of my GP and 6 monthly blood tests which I requested at the appropriate time.

When I was first diagnosed it was a shock and I really didn’t know how to process it. I felt fine and had to remind myself I had cancer. I gradually told friends and family who were shocked but sympathetic. My mum was in her 80s, my dad had died 20 years ago of cancer and my sister has multiple sclerosis (MS). I decided that to say I had leukaemia would panic mum too much, so I told her I had lymphocytosis. I still refer to my funny blood if I have to explain anything to her.

In 2018 I had a call from the surgery to say haematology wanted to see me and I learnt that they wanted to check my symptoms as my white count had gone over 50. Symptoms were still minor so I was discharged again and told that they would only want to see me if my numbers went over 100 or my symptoms worsened. I was told the numbers could go up, down or stabilise. I was now on 3 monthly blood tests which I request and ask for a printout each time.

My husband found it difficult to understand why I wasn’t offered treatment, but I had been told by the consultant that it was best left well alone until it was needed which could be never.

I had suffered from a small patch of scaly skin on my neck for a few years. Eventually, by chance, I mentioned it to a doctor who was interested in dermatology. She thought it was Bowen’s disease. This is a skin cancer that normally isn’t a great risk but can turn nasty. I later found that CLL patients have a higher risk of skin cancer. After several months of wait, the cancer was removed by a surgeon. Since then, I have had tiny patches of the Bowen’s disease around the original site which appear, and I treat with a chemotherapy cream around once a year as it erupts.

And so, life has continued with the blood tests and my numbers are now considered stable. What has changed my perception of CLL is covid. As the pandemic started to creep into our lives, I was concerned about getting the virus but didn’t really understand the risk. I had a friend with myeloma who had been having chemotherapy through the winter of 2019/20. Sometime during March, she picked up the virus whilst going to the hospital for treatment and she died in April. That was dreadful.

Throughout the pandemic, I have largely shielded. Leukaemia Care started sending out more information and advice. I joined Facebook and then the Leukaemia Care page and CLL support group. I began to listen carefully to the advice. Through Leukaemia Care, I learned that I needed to register as clinically extremely vulnerable which I did online but needed the surgery to register me too. On my first enquiry, they were awaiting instructions. The second time they had set up a team to work through the patient list. The third time I was given a telephone appointment with a doctor. He said that because I wasn’t on treatment, I wasn’t eligible. I sent an email to the Leukaemia Care advocacy team to ask for advice and I was provided with a letter of explanation and CEV eligibility. This I sent with a covering letter to my doctor and 10 days later I received a text from the local council to say I had been identified as CEV. This was followed by an NHS letter and guidance sometime later.

I took part in the NHS antibody study for cancer patients after the second and third jabs where no antibodies were detected. The upside of this was that my doctor sent me a text saying that as my antibody tests were coming back as negative, I should contact my specialist for advice. I wrote to her to explain I didn’t have a specialist and needed a doctor to refer me to do that. She wrote to haematology and the advice was to get the booster jab 91 days after my third and if I had symptoms of COVID-19 to get a PCR test quickly and then inform them if it was positive for monoclonal antibody treatment. This has been superseded by the NHS system of sending out priority PCR kits that trigger antiviral or monoclonal antibody treatment within a 5-day window. Like a number of CLL patients, that hasn’t happened, and I had to go to the fallback system of ordering a standard kit through 119. This is added stress given that, even insisting that I am a priority patient, the 5-day window may be missed as I know has happened to at least 1 CLL patient.

So, as many of us, and many of the ‘coal face’ NHS staff recognise, the

pandemic has highlighted the lack of joined-up thinking and gaps in the top-down dissemination of information and guidance. Through Leukaemia Care we have been better informed than many health workers. I have always trusted that my health care professionals knew better than me and have accepted their word. I have never had to be so proactive in my health care. I think many patients on watch and wait have been left to the mercy of chance. Unless you have spent time and effort to keep informed through Leukaemia Care’s information, Leukaemia Care’s Facebook groups, webinars etc., then you are at the mercy of how informed your GP is or if you have the luxury of a CNS. I encourage all fellow CLLers to keep fighting your corner. I have heard some say that they have become too stressed and give up trying to get the care they are entitled to. I feel fine and I don’t look ill, and this can be a barrier. The health risk landscape for CLL has changed and we need to shout it out loud.

As I came to the end of writing this, I came across an article from April 2020 about Professor Chris Fegan, consultant haematologist at Cardiff University and an L.C. webinar contributor. He considers CLL patients as a “neglected cohort” who are given little support and experience high levels of anxiety. He considers that, as many of us may never need treatment, these patients would be better served by knowing this and removing the uncertainty and anxiety that goes with a diagnosis. I also think the neglect has been starkly revealed as the pandemic progressed and the blood cancer charities have had to fight to get the care and support, we need at this time.

If you'd like to create an area to make a collection for Leukaemia Care in lieu of flowers, we've provided a tool to make this as easy as possible at a terribly difficult time