Liz was diagnosed with chronic lymphocytic leukaemia (CLL) over five years ago. Here, she recounts her Spot Leukaemia story, and talks through her experience of being on a trial for acalabrutinib. All opinions expressed here are Liz’s own. 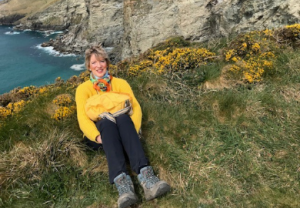 I had been on holiday abroad and had a horrendous infection, so took myself off to a tropical diseases clinic for a blood test, as well as going to the GP for antibiotics.

I was told very bluntly that I had chronic lymphocytic leukaemia (CLL) – I had no idea what CLL was – and then told I’d need chemotherapy at some point and yes, it’s chronic, so there was no chance of my getting better. I left, reeling. Cancer, chemo and chronic – but I felt well. Then they failed to inform my GP until pestered several times weeks later. My GP was marvellous – aren’t I lucky?

I was on watch and wait for four years. I had a couple of nasty infections, especially long-lasting coughing. My glands were pretty vast on my neck and under my arms too. The trigger was when I went to get my hearing checked: they took an X-ray and discovered my glands were blocking my ears. I had daily sharp pain in my ears, and apparently this is unusual. It led to my first treatment.

It might be argued that you don’t need to ‘spot leukaemia’ too soon, as watch and wait means you don’t need specific CLL treatment yet. So why do you need to actually know you have CLL?
However, spotting leukaemia sooner is extremely helpful with managing the symptoms: treatments for infections will be treated differently and be taken more seriously. Treatment for CLL can start at the right time and thus be better managed. It also means that patients with CLL can take appropriate precautions against catching infections and so make their lives easier.

Two years ago, the only NHS treatment on offer for first line patients was chemotherapy – even though it was known that chemo doesn’t work for those with unmutated CLL, which is the type I have. I nearly had FCR but at the last minute I asked for a second opinion. As a result, I went onto the far milder obinutuzumab and chlorambucil for monthly infusions; I had no real side effects and impressed myself by giving up alcohol for that period!

Afterwards, my remission was not the three to four years hoped for.

18 months ago, the inevitable happened – I was no longer in remission. Whilst it had been expected, it was disappointingly swift. Chemotherapy was not the magic I had sought, as we all knew it would not be. My chronic lymphocytic leukaemia (CLL) is unmutated; chemo wouldn’t give lengthy remission, and it most certainly did not, in my case.

Six months after my final infusion of obinutuzumab and chlorambucil, in June last year my consultant and I were talking through secondary treatment possibilities. “Acalabrutinib won’t be cleared by NICE in time,” he half-casually dropped into the list.

I had already read a little about acalabrutinib. I knew it was the second generation of the game-changing ibrutinib. I vaguely recalled reading the generally positive accounts from fellow CLL patients in the States, where acalabrutinib is known as Calquence. But without NICE clearance, with all NHS cancer trials put on hold because of COVID-19, and not having private medical insurance, there was no hope of acalabrutinib even being considered for my secondary treatment.

Unbelievably, luck was on my side. The year before, when making decisions about my first-line treatment, I had learnt of the benefit of gaining a second opinion: it helps significantly with decision making. As I now faced the choices of secondary treatment, I naturally consulted again the same CLL specialist. I was completely incredulous when he informed me that he was about to start a trial, that very month, of acalabrutinib and there was a chance I ticked the required boxes to be on that trial.

My treatment path became potentially clear. Of course, I would have gratefully taken ibrutinib or similar; it has brought about magical changes in outcomes for many CLL patients. Unsurprisingly, as with so many medications, some people have uncomfortable side effects. The point about acalabrutinib, the next generation, is that so many of those side effects have been either eliminated or minimised for most takers. I was both extraordinarily excited about possibly being accepted, and nervous about not being suited, for the trial.

I had to be tested: blood tests, blood pressure, scans etc. Luckily, I don’t have other illnesses being treated, whose medication could interfere with analysis of acalabrutinib’s effectiveness and thus make me unsuited for the trial. I held my breath – for four weeks! Joy! I was found to be suited. On 25th August 2020, I took home a months’ supply of the drug: 100mg to be taken morning and evening.

I was duly warned of possible side effects, though they were expected to be minor and mainly in the first two weeks or so. Yet again, I felt fortunate: I had only very minor petechiae (rash) on my face for a few days, and still do occasionally – nothing that can’t be covered by a bit of makeup! I honestly can’t think of any other side effects.

My lymph glands disappeared – hooray. However, the most extraordinary thing for me was, about three weeks after starting the treatment, I was just sitting down when I got a terrific sense of just feeling well. To date, that has not changed. I am immensely appreciative. Who knows how long the benefits will last – that is the nature of CLL – and must be a significant part of the research undertaken with the trial. I shall happily be taking acalabrutinib until that time comes.

The speed of the changes in how CLL is being treated is phenomenal. Under two years ago, the NHS standard first-line treatment was chemotherapy, even for those of us with the unmutated version. In May, I was told that NICE had approved acalabrutinib for both first- and second-line CLL treatment for certain groups in England and Wales. Based on my experience, this decision can only be good news.

Thank goodness NHS trials are up and running once more. There are several other apparently brilliant treatments for CLL being researched. The understanding of CLL has progressed phenomenally and I am grateful to be an infinitely small cog in this research wheel.

I am passionate about supporting responsible research. I am on a Research Ethic Committee (REC); medical research involving participants has to be cleared through a REC, whose job it is to ensure the rights and wellbeing of participants are properly protected. On these committees are eminent clinicians, research experts and non-experts such as myself all involved in scrutinising the value and care of the research applications.

One thing must always be made clear in any such trial: even if you agree to go on the trial, you may opt out at any time, need give no explanation and the medical care you will receive will not be affected. I surprised myself when I did opt out of a trial two years ago. The computer had randomly selected FCR chemotherapy for me. Although I felt a great loyalty to that original trial and had understood all the possible outcomes, I had naturally hoped to avoid the chemo option – and FCR is particularly strong – which we knew would not benefit me for long.

Thank goodness a dear friend convinced me to seek a second opinion. I went to see a second consultant just one week before I was due to start FCR. The opinion I then received enabled me to step away from sentimental acceptance of the computer decision making. I learnt that other options would probably suit me better. So, I put my needs first; I came out of that first trial and I am glad I did.

However, that experience did not put me off trials. I remain beyond grateful to all those who underwent trials of acalabrutinib way before my particular experience. I most certainly have zero intention of opting out of this trial – unless it becomes clear it is no longer benefitting me. I shall ever be grateful for the feeling of wellness I am relishing now.

Juvenile myelomonocytic leukaemia (JMML) is an excessive production of the monocyte white blood cells in the bone marrow, which infiltrate other organs including the spleen, liver, lung, and gastrointestinal tract.