Laura was diagnosed with chronic myeloid leukaemia at the age of 37 on World Leukaemia Day. Here, she shares her experience of a disease more common in those aged over 60.

I first realised something was wrong when I began to feel pain that came and went in my left side. After a few months it was getting gradually worse, so I decided to pop to the GP. I was seen by a pharmacist practitioner who suspected a kidney infection, but luckily decided to do a full set of blood tests as well as a urine test.

As well as the pain in my left side, I was also losing weight and my legs were absolutely covered in bruises. I didn’t mention this to the pharmacy practitioner as I’d lost my mum six months prior, so I’d put the weight loss down to grief and the bruises down to my clumsiness. When I look back, I feel so stupid; I had no idea I was so dangerously ill, and the pain in my left side turned out to be from my spleen, which was clogged with abnormal blood cells due to the leukaemia.

I was booked in for blood tests at my GP surgery the following week. I went along on a Wednesday morning, had my bloods taken and then was told to call in seven days for the results. I was not expecting anything to show up.

Six hours later I received a phone call from my GP asking me to see him that day. At that point, I knew I had cancer – I didn’t know what type, but I knew receiving this type of call usually meant one thing. I went to see my GP and he explained my white blood cell count was extremely high which could be due to a couple of different things, but the local hospital had phoned him to say they thought I had leukaemia. I was due to go on holiday to visit family in Ireland in a few days and he said not to fly as I would need to be seen at the hospital within two weeks.

This was devastating news. My father-in-law was turning 70 and we would miss the celebrations; my two daughters wouldn’t get their summer holiday, and we all wanted to see our family in Ireland. I felt scared, lost and guilty that a possible cancer diagnosis was affecting my family already. Of course, our family were hugely supportive and just wanted me to be OK.

A few days later I received an appointment to see a Haematology consultant, but it was exactly 14 days from the day my bloods had been taken so I tried to convince myself that it couldn’t possibly be leukaemia or I would have been seen sooner.

Those two weeks felt like the longest two weeks ever. I tried not to Google my symptoms but that was impossible; I knew I had so many symptoms of leukaemia, but I tried to convince myself it was something like IBS and all would be OK. My friends and family all said there was no way it was leukaemia – none of us wanted to believe it. Over the two weeks I was rapidly getting more ill. I was losing weight despite eating anything I wanted, and I was absolutely covered in bruises. I was also getting dizzy spells and palpitations which I think were due to the anxiety of the situation – being told you might have leukaemia then having the long 14-day wait was so hard to go through. It was a rollercoaster of emotions.

The day of the appointment arrived – 4th September 2019. I was nauseous with anxiety as my husband and I sat waiting to go in. After some more blood tests and a short wait we were called in to see the consultant. He asked what my GP had told me and then calmly said, “Well, it is leukaemia.” I will never ever forget those words.

My husband Pete immediately held me tight and we cried together. I swore quite a lot too, as after losing both my parents to cancer, I couldn’t quite believe it was happening to me as well. I asked if there was any connection, but my cancer was completely unrelated and not genetically passed down to me and I wouldn’t pass it onto my children either. The consultant then went on to explain that it was a type called chronic myeloid leukaemia (CML) and that the treatment options had come a long way in the last 20 years; CML was no longer the death sentence it used to be. He said I would need a bone marrow biopsy the next day to check for a Philadelphia chromosome that appears in 95% of CML patients. He explained I would be starting on a treatment called imatinib, a tyrosine kinase inhibitor (TKI), the same day as the bone marrow biopsy and that it was in tablet form, so I could be treated at home and would not need to attend hospital for chemotherapy. This was such a huge relief to us both.

Over the following days I had a bone marrow biopsy and several rounds of blood tests. The consultant then confirmed I definitely had Philadelphia+ CML. By this point my white blood cells were high, my red blood cells were low, my platelets were through the roof and I was starting to look very unwell. I was losing weight and became very tired and pale. It was then that I started on imatinib. 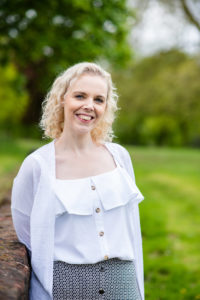 The first few weeks after diagnosis were the hardest; the fears and anxiety set in. What if the treatment didn’t work? What if the cells mutated? What if I couldn’t tolerate the side effects? What if I couldn’t socialise like I used to and go for long walks in the countryside? How would I carry on working? Over time, I realised that I was lucky and things were going in my favour.

However, I suffered from bad side effects for the first few months of treatment, but as my body adjusted to the strong cancer drug, these improved. Due to this type of leukaemia being chronic, I will need three-monthly blood tests at the hospital for the rest of my life, but it’s good to know I’m being so well looked after by our NHS. There is a special type of PCR blood test called the BCR-ABL which basically gives me and my consultant a percentage of leukaemia cells in my blood. At diagnosis I had 100% leukaemia cells; by 12 months I had hit every treatment target and had just 0.048% of leukaemia cells left in my blood.

As the time of writing this it’s been over 18 months since I was diagnosed with CML. I’m still doing well on imatinib, but some days the mental and physical side effects take over. I suffer with fatigue, bone pain and muscle weakness. Over time these side effects have lessened, but I have good and bad days. I love yoga and also use aromatherapy to try to help with this, though I have to balance my time and activities with rest periods.

The hardest thing I’m finding now is the mental aspect of having a chronic cancer that will probably never fully go away but will hopefully continue to be controlled by TKIs. It’s a lot to get my head round and fully accept the diagnosis of living with a chronic cancer, and that three-monthly trips to the hospital will be for forever, but I also feel so lucky to be so well looked after by the NHS and be on a treatment that is working. I have high hopes of trying to go treatment-free one day; this option does become available to some patients whose treatment has gone really well. If my numbers stay low for around five years, I can hopefully try coming off the TKI treatment. This is still a new thing with trials taking place, but so far it seems for some people it works and they successfully come off treatment. For others it works but only for a short time and the leukaemia cells return, and unfortunately for some it never becomes possible to stop treatment. TKI therapy was an amazing breakthrough and lifeline for us CML patients.

It’s hard explaining to friends and family how much it affects me. I’m told I look well, and as I’m not on intensive chemotherapy I didn’t lose my hair, which people expect if someone is having cancer treatment. Everyone thinks of cancer as gruelling treatment followed by remission or a death sentence, but CML is neither of those. I was told by a GP after diagnosis: “If I had to choose a cancer, I’d choose yours,” – a strange thing to say but I think it did bring comfort at the time. I’m realising as time goes on I need to accept the diagnosis and try to think of it as a long-term health condition and try to forget its cancer. That word – the big C – seems to make it worse. So many people live with different chronic illnesses every day and I’m determined to live as full and happy a life as possible with my CML.

However, over the past few months, I’ve realised I need some help with this acceptance and the new me, so I’m about to begin six sessions of counselling which are being paid for by a grant from Leukaemia Care using the Ann Ashley Leukaemia Counselling Fund. The fund is available to anyone diagnosed with leukaemia and their close family members.

I live in the West Midlands with my husband Pete and our two teenage daughters, Sophie and Ceara. We enjoy a full, happy life and our favourite place to be is enjoying the great outdoors and socialising with friends and family. I do have hard days – who doesn’t? – but ultimately I’m determined to live and love my life as fully as possible whilst also living with CML.

Laura is taking part in the 2021 Spot Leukaemia campaign, sharing her story as part of World Leukaemia Day on 4th September.

Laura said of the importance of the campaign: “The Spot Leukaemia campaign is hugely important. I had several symptoms of leukaemia but I had no idea what they were. Maybe if I’d seen more about the symptoms in the media and online, I would have gone to my GP much sooner.”

Find out how to get involved with our campaign and World Leukaemia Day this September by going to www.spotleukaemia.org.uk

Our reports are based on the findings from our surveys and are written with the patient in mind.