For Kerry, it was an unusually heavy period that prompted her to seek medical advice, but she never suspected that it might be cancer. In remission from acute promyelocytic leukaemia, Kerry is sharing her Spot Leukaemia story.

I was 42 and never had any illnesses, only ever being in hospital to have my three children. It was June 2020 – in the middle of a pandemic. I began to get bruises I knew weren’t quite right, but I didn’t really think anything more of it – you don’t when life is busy. They first appeared on my stomach, then my arms and legs, but looking back that was the first sign. It wasn’t until I had uncontrollable menstrual bleeding that I knew I had to do something more – that did quite literally save my life. 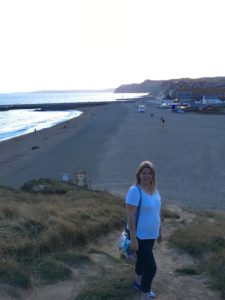 I contacted my GP, who arranged for a blood test the following day. However, I sought help via 111 at about midnight when I really couldn’t control the bleeding anymore. It was too scary, and I knew I couldn’t wait for the blood test. 111 sent an ambulance after I had said yes to bleeding a cupful – it certainly felt so. The whole time when I was being checked by the paramedics at 3am and whilst waiting in A&E, I felt like a fraud. I felt absolutely fine. I was checked by the Gynaecology team – all seemed fine. They did a blood test, so I was just waiting for the results. However, I suspect they knew then what was wrong.

By 11am I was moved to a side room and suddenly underwent a bone marrow biopsy. It was all a bit of a blur but I remember the pain and the emotional anguish of that to this day. By the afternoon I was informed by a Haematologist that I had leukaemia and I needed to be moved to the Oncology unit at another hospital and start treatment. That was the scariest moment – Oncology meant cancer. So, I was transferred by ambulance to the COVID-19 ward whist awaiting a negative COVID-19 test.

They suspected acute promyelocytic leukaemia (APL) – a ‘good’ type of leukaemia, and with advances in treatment, a very treatable type too. I started taking ATRA tablets and they also prescribed hormone tablets to control the bleeding. It was confirmed as APL the following day when the results of the bone marrow biopsy were back. It was explained to me that the treatment for this was the ATRA and arsenic (yes, arsenic) protocol. I would start the induction treatment a few days later but the outlook was good as I was also low risk.

I was in hospital for four weeks, the longest four weeks ever. I wasn’t really prepared for it at the start – no one tells you a time scale. I missed my son leaving primary school (although I did his assembly by Zoom) in what was already a horrendous year due to COVID. I also couldn’t have any visitors due to the pandemic – I was feeling in complete fear and so alone. Telling friends and family was hard and even harder was to let my eldest children, then aged 13 and 11, know – no one prepares you for that. As a parent you just want to protect them. 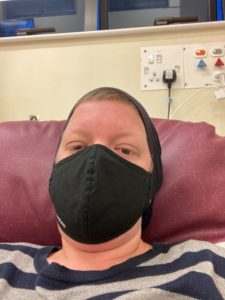 I developed differentiation syndrome – a common side effect to prescribed steroids – along with fatigue, but overall coped well with the treatment. I was able to finish the induction treatment as an outpatient – that was so much better than 24/7 in hospital.

Eight weeks after diagnosis I was confirmed in remission… and began consolidation treatment. I was losing my hair now – I was told it would thin, but I actually had to have it shaved off in the end. This was so traumatic, and I couldn’t bear to be seen as a victim – obviously now people would know what was wrong. I think it was down to a cocktail of drugs in hospital that caused the hair loss as ATRA and arsenic aren’t meant to cause complete loss.

In all, it was a long nine months in total and the treatment regime took over my life. I was also categorised as clinically extremely vulnerable (CEV) regarding COVID – but I felt lucky. I was alive, the treatment wasn’t traditional chemotherapy so I didn’t feel too ill, and there was no talk of having a stem cell transplant. I was even able to return to work after five months off sick. I wanted to return to work after the second round of consolidation treatment, which my haematologist supported, so I went back in December 2020. It gave me some normality, some routine and structure which I had really missed. I started a phased return with lighter duties and loved being back. My hair started growing back during treatment too – my fear was that it wasn’t going to start growing until treatment was completed, so now I have a shorter style to try out. 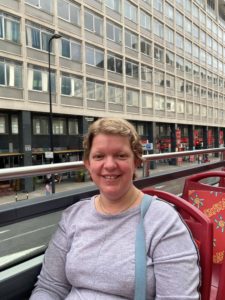 I finished treatment in March 2021. Though it has been delayed, I finally in July just before my 44th birthday received the second negative result from a bone marrow biopsy, so remain in remission. That’s it – after five bone marrow biopsies, endless blood tests, 63 doses of arsenic and hundreds of ATRA tablets – I was officially done.

I discovered Leukaemia Care’s APL National Virtual Support Group in November 2020, just as I was mid-way through consolidation round two treatment. I wasn’t sure I wanted to join as I was nervous about what it would be like, and hadn’t ever seen myself as needing a support group. However, I decided to be brave and click join, and this has proved to be a great source of information – seeing other people who had successfully completed treatment and hearing their stories gave me hope. I still can’t say the word cancer – I find that too hard. I’m not sure I have processed quite what I have been through yet. But with COVID and then APL, I am now just determined to get on with life.

I would never have suspected leukaemia – all the symptoms are vague and can be mistaken for other illnesses. APL is also rare; about 100 people a year are diagnosed with it, but it is aggressive, so my heavy and unusual period really did save my life.

What is campaigning and advocacy?

As a charity we are actively involved in campaigning on behalf of patients and their carers, which we feel is an important part of the work that we do. We are passionate about doing everything we can to improve the experience of patients throughout their cancer journey.