For Ian Hayley, it was a sudden, strong infection that convinced him to see his GP. Expecting to be told he’d picked up a bad virus, he was instead diagnosed with chronic lymphocytic leukaemia (CLL). Read on for Ian’s Spot Leukaemia story.

Spring 2012 and things were good. I had two years to go to retirement, the project I was working on should be finished by then, and I would also reach my target of 100 blood donations about that time too, having reached 89.

Then out of the blue, something hit me. I felt dreadful, and my lips were covered in cold sores. My GP diagnosed a virus but thought a blood test was in order – quite routine! A week or so later, I received a telephone call from my local hospital and was asked to attend a meeting with a haematologist to discuss my blood results. Confused and somewhat alarmed, I asked my younger daughter to attend with me for moral support and, being a nurse, she may understand better what I was about to be told. We duly met the haematology consultant, and I was informed that I had chronic lymphocytic leukaemia (CLL). This came as quite a shock as an uncle of mine (not much older than I) had died from leukaemia some years previously. It was somewhat reassuring when it was explained that I only had Stage 1 CLL, and the consultant’s parting words were that “more people die WITH CLL than OF it”. Small comfort I suppose.

Naturally, I found it hard to take in and understand what all the different figures of my blood components meant (and still do) having no previous knowledge of leukaemia and its different forms. I’d been given a Macmillan booklet by my consultant which outlined the symptoms of CLL, and I was put on Watch and Wait with three-monthly blood tests in the short term. I did some research on CLL on the internet but there was too much to absorb, so I settled for having regular blood tests and coming to terms with the symptoms – principally night sweats, insomnia and fatigue.

Telling the rest of my family was something which I did not look forward to doing as I was keen to allay any sense of the panic that I had at first experienced when being told. One daughter already knew, and we sat with my sister and ex-wife to give as full an explanation as possible. They reacted as expected and assured me of their support.

Watch and Wait or “Watch and Worry”? How long would this go on? I resigned myself to trying to put it to the back of my mind and get on with my life despite the restrictions that my condition was putting on me. Support from friends and family was there but I don’t think people fully understood how I felt both physically and psychologically. I’ve not met in-person anyone else in the same boat so I’ve felt alone all along my present journey.

My health over the past nine years has been generally good; the most “serious” issue was shingles. Annoyingly, this past winter has seen me with persistent colds developing into chesty coughs dealt with by over-the-counter medication. I habitually receive a flu jab and to date, they have protected me from it. COVID-19 has caused me to be more alert to the dangers of infection, so I have shielded since March last year and lived within my family “bubble” since then. 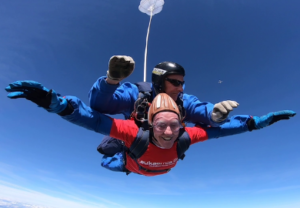 From the day of my diagnosis, I was offered no professional support other than the reassurance from my hospital doctor that my condition was stable. I have changed significantly in that pre-CLL I was active and energetic – prepared to tackle the challenges of my work and my domestic situation. I used to rise early and slept well, whereas now I’m tired and lethargic. I try to tackle it as best that I can and avoid saying: “Why me?” I now take life as it comes! The biggest boost I received was when I discovered Leukaemia Care and being offered a “buddy” with whom I have spoken once a month by telephone. John and I have a lot in common apart from CLL – we’re of similar ages, but significantly, I worked for many years in John’s location so we have had much to talk about. We have actually met on three occasions, the first at an LC patient information day on fatigue in Sheffield; then at Worcester for the LC 50th anniversary celebration; and in York for an interview with the Telegraph for the Christmas appeal. We plan to meet up when COVID-19 is a distant memory!

In gratitude to Leukaemia Care, I took part in a sponsored skydive on the 8th September 2019. Skydiving had been on my bucket list for a very long time, and to my immense surprise and pleasure, my two daughters arranged one for me with Leukaemia Care as their gift for my 70th birthday in March 2019. So, on a beautiful sunny Sunday morning, my family and a host of friends assembled at a local airfield and I took to the skies – to 15,000 feet to be exact, accompanied by my daughters’ partners who had joined me not only for moral support but also for having joined me in obtaining a substantial amount of sponsorship money for Leukaemia Care. The sense of elation when I and my tethered partner left the aircraft was indescribable; seeing the surrounding countryside whilst free-falling the first 10,000 feet in a cloudless sky before drifting down for the last 5000 under a blue and white parachute.

Sadly, it was over too quickly, but I have ticked a wonderful and unforgettable experience off my bucket list. I would strongly urge anyone who has a wish to complete a skydive to go for it and at the same time, help to support Leukaemia Care in the great work that it does for blood cancer sufferers like me.

To apply for our Ann Ashley Counselling Fund please complete the below application form and a member of the team will be in touch.