David FitzGerald: my experience of COVID-19

David was diagnosed with chronic myeloid leukaemia (CML) in 2012. Last year, he contracted COVID-19. Here, he shares the story of his leukaemia diagnosis, and his experience of having COVID-19 as a cancer patient.

I was diagnosed in 2012 – I went to the doctor when my vision was degrading rapidly; you don’t tend to wait too long to go to a doctor when something goes wrong with your eyes.

I was referred to an ophthalmologist who initially suspected HIV or Bechet so ran some blood tests. The next day, I got a call and was asked if I could go to Barts Hospital where they’d be expecting me for some tests. I happened to be working just a few minutes away from there, and they said I should go right away because the blood test showed very high white counts and many other abnormalities. Naively I thought this was all routine stuff and told my wife there’d be no need to come and join me at the hospital.

When I arrived and was in the waiting room, I couldn’t help but notice I was clearly in a haematology department – it was then that I cottoned on that cancer was on the cards. Sure enough, the consultant spoke to me and said that they were virtually certain I had chronic myeloid leukaemia (CML) and they’d take a bone marrow sample to definitively confirm.

Lots of things started to make sense. I asked if this was why I was very tired, had a really sore sternum, and was it also why I had lost loads of weight but had a bit of a pot-belly? My spleen was huge. They explained to me that I had so many white blood cells that they were rupturing my retinas, and this was why I was losing my sight. All the health problems I’d been having at least had a common cause.

I then asked what has become known in our household as the stupidest question ever asked to a doctor: “Does this mean I can’t go on holiday to Thailand next week?” Of course it did!

Things started to hit home. Cancer. Leukaemia. Very big words, and ones I struggled to get out of my mouth when I rang my wife and told her that she should come down to the hospital, after all. The next 24 hours involved lots of signing of consent forms, sperm banking, and a great deal of uncertainty. A blood test came back with results which looked like this was much more than CML and something more imminently life-threatening. That turned out to be an error, quickly rectified, but made me happy it was “only” CML. This combined with the success story of TKIs that I was told about, I was optimistic for the future.

I was placed on 400mg of imatinib, but it caused me bone pain, so after a couple of months with no improvement I was switched to 100mg of dasatinib which I tolerate well. Through constant dialogue and shared decision making with my consultant, I have reduced my dose of dasatinib over time and now take just 20mg a day. My theory is that as a relatively young CML patient, and the potential long-term need to take the medication, the lowest working dose is best for me. My CML is at very low levels – my most recent test did not detect any, the first time that’s happened. 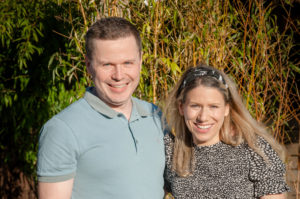 David and his wife. With thanks to Melissa Viviers for the photography

I contracted COVID-19 on the 14th or 15th of December, from our nanny. Symptoms started on Saturday 19th December, which initially were aching muscles and a mild temperature. This increased over the next two days to have a higher fever of about 39°C, and a persistent painful cough.

At no point was I totally bedridden, probably because I didn’t really have a choice as my wife and I, both of us having COVID-19, had to look after our twin toddlers, so that wasn’t really an option.

I think I was quite lucky. The worst part was the first few days, wondering how bad it would get. As blood cancer patients, we are in the “clinically extremely vulnerable” group, so I was worried I would take a turn for the worse. My wife’s friend’s dad had COVID-19 the same week, took a turn for the worse and suddenly degraded and died.

After about a week of symptoms, I was more confident that my symptoms were stable and I would not get worse, and this turned out to be the case.

A month later, I still had a cough and required salbutamol inhalers. My sense of taste and smell began to return too.

Now almost two months later, it’s clear my lungs have been hardest hit. I have had to start to take steroid inhalers, something I haven’t needed since teenage asthma. I think it’s going to take a while to recover 100%.

We shielded for a long time and were the most careful people you could meet. But we had one known risk vector, in our nanny, which was our undoing. I think to avoid infection you really can’t have anyone in your house at all that you do not have 100% understanding of what they have been doing and where they’ve been.

David is a moderator for the CML UK Facebook group, an online support group for CML patients and carers. If you would be interested in joining, search ‘CML UK’ on Facebook.

If you have any questions about COVID-19 and leukaemia, get in touch with our Nurse Advisors. Email support@leukaemiacare.org.uk or call 08088 010 444.

Stay informed about all our latest activities, events and news on our quest to support anyone affected by a blood cancer. Sign up to our newsletter and keep up-to-date with what's happening at Leukaemia Care.