It took Caroline months of persistence to get her diagnosis of chronic myeloid leukaemia. She knew something was wrong, especially when she was told she had high platelets – something she’d experienced before from a previous diagnosis of melanoma. But still Caroline’s symptoms were brushed aside as IBS. Here, she shares her Spot Leukaemia story.

In the summer of 2017, my fiancé and I had just bought our first house together – we were busy doing it up and planning our wedding. I’d been having occasional bouts of what I can only describe as fatigue crashes, but they weren’t very often, and I just put it down to my age. What actually took me to the doctors though was bowel issues. I’d always had a very normal and regular digestive system, but out of nowhere I started with IBS-like symptoms, which was unusual for me. I put it down to stress as I’d just had a mole removed from my leg and doing up the house hadn’t been easy.

After two or three weeks of constant symptoms I went to the GP. Amongst other things they did a blood test which revealed slightly high white blood cells and blood platelets. Following this I had quite a few different blood tests, all of which came back normal except for the platelets and 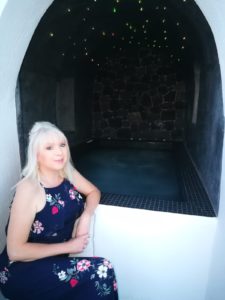 white blood cells. I was told not to worry by the GP as this could just indicate a bit of an infection somewhere in my body, or was due to IBS, and I was prescribed some IBS medication. However, the high platelets raised a bit of a red flag to me because I had a history of melanoma in my lymph nodes five years earlier, and the only thing that constantly showed as slightly unusual on my blood tests were high platelets. So, I kept going back to the doctors.

After a few months of persisting, I was eventually referred to a haematologist. The first round of blood tests all came back normal except for the platelets and white blood cells, and I was told if the next round of tests revealed the same, I’d be discharged. The next tests took a while to come through and I ended up having my next appointment scheduled for the day of my birthday. I had the day off work, and we had a nice day planned, including a meal out, and we were going to collect our wedding rings from the jewellers. I went to my hospital appointment all dressed up and expecting to be discharged. You can guess what happened next! 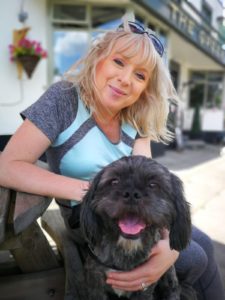 That last round of tests happened to test the BCR-ABL gene, which looks for a chromosome abnormality known as Philadelphia chromosome often found in chronic myeloid leukaemia (CML). Unfortunately, I tested positive for that and was therefore diagnosed with CML. It was a shock but also strangely a relief, as I felt like I’d been going around in circles having blood tests for months. After being given a folder full of information we were ushered off into a little room and had a bit of an emotional crying session. I told my fiancé we didn’t have to go through with the wedding, as I knew from the melanoma what a bumpy ride cancer can be. Fortunately, he’s not managed to escape me yet! Leaving the hospital was a bit of a blur but I remember going to collect the rings and the jeweller was trying to put the ring on my finger whilst I was in tears; she probably wondered what on earth was going on when it should be such a happy time!

It took me a short while to get my head around it all, and I have to say my haematology team were (and still are) wonderful and very supportive. I was given a choice of treatments and I went with imatinib, which I’m currently still taking. The main physical side effect I’ve struggled with is the fatigue; I’ve tried to work my life as best I can around this. It’s not been easy at times, but I feel very lucky to have been diagnosed in a time where we have such an effective treatment for CML.

However, I think the mental side effects of cancer aren’t understood as well as the physical side effects – no one really prepares you for that. Cancer can be such a lonely place in the mind when everyone around you is relatively healthy and getting on with their lives. It might not be for everyone, but I’ve found recently it’s helped me to connect with others in a similar situation via social media.

It so important if you feel something isn’t right for you, that you persist. I feel if I had accepted my slightly high platelets and white blood cell count were down to IBS, it would have just been left at that – I had to ask several times to get referred to see a haematologist. I have changed my GP surgery now, but I think awareness campaigns on blood cancer are extremely important and it would be good to see more posters or leaflets in GP surgeries.

Find out more about the latest vacancies at Leukaemia Care.