Anton Brcar was 47 when he was diagnosed with chronic lymphocytic leukaemia (CLL). Now 53, Anton tells us about his experience of the Watch and Wait period and what he would change to improve it, as well as the challenges he faced during the COVID-19 pandemic. 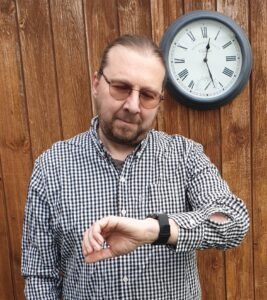 I had concerns about fatigue but put it down to other issues; low B12, low vitamin D, stress etc. Upon reflection, I also had an increased number of infections too. However, it was only when blood tests were carried out to check my prostrate that there was an issue found with my white blood cells. My GP raised the possibility that this could be linked to blood cancer and sought my permission to investigate further. From this, I was diagnosed with CLL.

My GP simply told me that as had been mentioned in my previous visit, the blood results indicated the possibility of blood cancer, and this had been confirmed as CLL. I was given a printout of information about CLL and told I would be referred to haematology.

Following the initial shock of diagnosis, I found my first appointment with my haematologist reassuring. The Watch and Wait process was explained and I was told how treatment was not started immediately, but my symptoms etc., would be monitored over time and a decision on treatment would only be undertaken when my disease progressed.

However, I found my appointments with haematology appointments increasingly frustrating. I rarely saw the same consultant twice and felt my concerns over my fatigue were being dismissed. I still believe, as fatigue cannot be measured, that it is discounted by many healthcare professionals, even being told by a GP that the cause was probably my nerves, not the CLL.

At one stage I was advised I would be moved to community monitoring, and have bloods taken and results being passed on to my GP, without the need to see a consultant. I then received my next haematology appointment as usual, and a different consultant decided in view of my relatively young age that community monitoring would not be suitable.

I made the decision to let friends, family and colleagues at work know about my situation. The concept of Watch and Wait is the hardest part to explain. I had only started teaching at a new school 5 months previously but being an experienced Union Lay Officer I wasn’t overly worried about letting HR know. They were very supportive and even though my contract was initially full time for that academic year only, they offered me a permanent contract with reduced hours, which better suited my needs.

However, in 2018 work was becoming increasingly unmanageable, I would be using days off to recover from the fatigue of work. I would also be off work with illness only to return for a couple of days and pick up the next bug circulating. I did not feel the situation was fair on the school and particularly my students, so with Union’s assistance I agreed to resign and take gardening leave until the end of the academic year, whilst I worked out my options.

My following routine Watch and Wait appointments coincided with lockdown and took place by phone throughout the rest of 2020 and into 2021. The 3 monthly recommended appointments seemed to become 6 monthly and even then, would only be issued after chasing up to secure them.

Over the course of 2021, despite being told my bloods were fine, I felt more unwell. In May 2021 I was admitted to the hospital with pneumonia. My primary concern was I had contracted Covid-19; however, I was diagnosed with community-acquired pneumonia, and I was treated with IV antibiotics and discharged after a week. During my hospital stay, I was not seen by anyone from the haematology department. My next appointment was in June by phone, I requested my next appointment be face to face, so I could have a physical examination, as I was unsure of how to correctly check my own lymph nodes etc.,

In December, 6 months after my last appointment and after numerous calls requesting an appointment, I was offered another phone appointment. If I did not accept it, they would be unable to give me any indication of how long I would have to wait for a face-to-face appointment. I had my bloods taken for the appointment and received a phone call at 10 pm the same night, to be informed I was anaemic, and my appointment was to be changed to face to face.

At the appointment I was also told I was severely neutropenic and advised to contact them at the first sign of infection, I was also told I would need to start treatment. The following weekend I developed a fever and contacted haematology; I was advised to go to A&E. On arrival, I explained my background and my neutropenia and was told I would see someone swiftly and be moved to a separate cubicle as the waiting room would increase my risk of contact with further infections. Despite returning to reception on several occasions I spent four and a half hours in the waiting room. Only when I managed to speak to the triage nurse at reception was the issue escalated and I was finally seen and moved to a separate cubicle. I was then admitted and was given 5 days of IV antibiotics for the infection and G-CSF treatment for my neutropenia. During my stay, I was taken for a CT scan which showed how my CLL had progressed and confirmed the need for treatment. It was decided a bone marrow was no longer needed as the CT scan was conclusive.

At the appointment, the consultant appeared to have no knowledge of my case and wasn’t aware of my hospital admission approximately two weeks previously. I can’t help thinking that had my appointments not been delayed, my disease progression may have been picked up sooner and my hospital stay with neutropenic Fever may have been prevented.

What I Would Change About Watch and Wait

I feel that many of the issues could have been addressed by the introduction of a named CNS contact. Although I understand the constraints imposed by the pandemic, I was still concerned with the care I received over the period. Named contacts for all patients to ensure continuity of care and reassurance when needed. The Watch and Wait period is an anxious one. Ensuring consistency of intervals between checks could be improved, even if it means having bloods taken without the follow-up appointments, provided no issues are found.

Thank you for your Donation

We receive no lottery or Government funding so we rely completely on our fundraisers to help us maintain our support services.