At only 28 years old, Alex was a nurse working with haematology when she was diagnosed with acute myeloid leukaemia (AML). As both a patient and a healthcare professional, Alex retells her unique diagnosis experience as someone caught between two worlds. 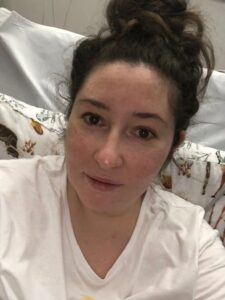 When I initially contacted the GP, I informed her that I had tonsilitis symptoms. I have had tonsilitis previously so I know the symptoms and how unwell it can make me if I don’t get the correct antibiotics quickly. She dismissed the tonsilitis as a ‘viral illness’ and I was told to ride it out for a few days and if it got any worse, she would prescribe me antibiotics for 3 days’ time. I ended up taking the antibiotics as it did get worse, to the point where I couldn’t speak; the pain was incredible. On the Monday I was vomiting blood which I thought was maybe a gastrointestinal (GI) bleed. As a nurse myself, I rang 111 to explain that I had a couple of episodes of fresh blood followed by coffee-ground vomit. He was quite abrupt, asking me how I knew it was coffee-ground vomit. I then had to explain to him I was actually a nurse working with haematology.

This is when the tables turned and what I thought was a simple tonsilitis turned into a cancer diagnosis. I attended my local accident and emergency (A&E) department on the advice of the GP. Normally, I would have stayed at home but due to coughing up the blood, I knew something wasn’t right.

After waiting in the A&E waiting room for about 3 hours I was triaged by the nurse; my heart rate was high and blood pressure quite low. She decided to tell me that I didn’t look too well, and she was going to keep her eye on me, a few hours passed and then it was my turn to be reviewed by the A&E consultant. Full history was taken, I explained about my throat being sore and coughing up the blood, so a full examination was completed, bloods were taken, and he took my pulse manually. The recording was so high on the machine. It was true, I did have a pulse ranging from 140-160bpm. This is when he decided to take me to the resuscitation (resus) department. He explained the only reason I was there was so they could keep me on the cardiac monitor to make sure they didn’t miss anything. Initially, we both thought it was because I was dehydrated and a bag of intravenous (IV) fluids and IV antibiotics would do the trick and I would be on my way. This was before the blood tests came back.

My bloods came back the consultant came in to tell me that my potassium was low on the blood gas, so he wanted to give me some IV fluids with potassium, again I assumed this was because of my reduced oral intake with the tonsilitis. He didn’t mention anything about my full blood count (FBC) at this point, he then repeated my blood test.  On we continued with the IV fluids, on the cardiac monitor in the resus department and then he came back a few hours later with my blood test results.  All I can remember is him sitting down and saying to me ‘Your bloods are back, and I have some bad news… You have a white cell count greater than 200 and platelets of 14. As a nurse working in haematology, you must know what that means.’ Yes, I did know what that meant but I made him tell me in his words not mine. That’s when he told me, it looks like you have acute leukaemia. The next hour or two were a blur, all I can remember is my fiancé bringing me in a bag and I had to tell him. I rang my mum, dad and other family members to tell them the doctors think I have leukaemia and I was hoping that it wasn’t. I informed my friends and colleagues of the diagnosis, so they knew what was going on, I remember some of them crying – that was hard. Still to this day two months later I haven’t cried or got emotional. My main emotion is still anger – why me? 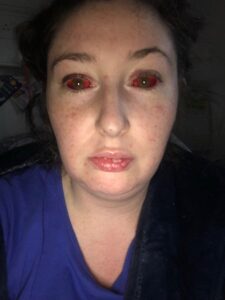 I was then seen by the haematologist on call, a lovely consultant from Southport hospital. He was asking me lots of questions asking did I have any of the symptoms of leukaemia, any bruising? Any abnormal bleeding? 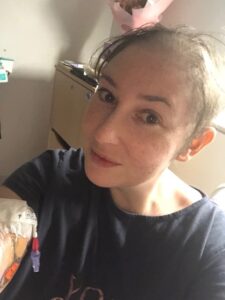 Bleeding from the gums? I didn’t have any of these, apart from a bruise on my arm which I remember getting from knocking into a hospital bed frame. He went on to explain treatment options due to my white blood cells being so high, he suggested leukapheresis to remove them.  At this point, I only had a small cannula, and it was early hours of the morning, so this did not happen, when my potassium stabilised I was then moved to my ward, where I work surrounded by my friends. That morning I was seen by my haematologist who confirmed that I had AML. I had managed to avoid a diagnostic bone marrow because my blood film already had confirmed it was indeed AML. Following this in my head I thought to myself ‘it’s here, it needs to go.’ I remember speaking to the haematologist, signing the consent form for treatment and then waiting for what felt like forever to get my PICC line inserted. When that was in, I had some platelets and then my first lot of chemotherapy that evening. As the days went on, I did get severely unwell, I was even seen by a doctor from intensive care due to having multiple infections, fungal infections and at times even struggling to breathe. It was madness how I went from having no symptoms of having AML to being very poorly within days of being admitted.

Being treated on my own ward with my colleagues around me helped because they were there to help me through the tough times. But I think that even being a nurse doesn’t make you invincible. I now have a better understanding to what it actually feels like to be on the receiving end of having chemotherapy and the side effects patients actually go through first hand. And even though I had the knowledge to spot the signs of leukaemia when I was diagnosed, I didn’t spot the signs as the symptoms are so vague! 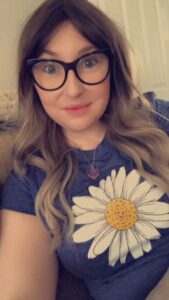 Post four cycles of chemotherapy, which lasted from November to April. I must undergo a stem cell transplant to ensure full remission and stop the cancer from coming back. Thankfully my lovely older brother is my donor and it’s set to go ahead in May. There is a long recovery ahead. I am thankful to my haematology team who got me through the treatment but the main thing to remember is you are braver than you could ever imagine when you get a diagnosis such as AML or any blood cancer. Fight or flight kicks in, for me it was fight. It’s a difficult journey but you must be honest with yourself and if you are having a bad day speak to your team because that’s what they are there for to support you. Always remember you are never alone, there is always someone to talk to.

My advice to anyone would be to listen to your body. Signs of leukaemia are very vague and in my opinion GP practices need further education to spot these signs as a serious life-threatening illness could be disguised as a virus and this could lead to misdiagnosis. If you notice anything different in your body, no matter how small, make sure you get it checked and even ask for a second opinion if you aren’t happy. Hair loss is something which comes with the chemotherapy used in haematology. It is scary when it starts to fall out but remember it’s only hair, it will grow back. Having the support of your health care assistants (HCAs) helped me massively when I started to lose my hair. But thankfully amazon does lovely wigs for around £20, and nobody knows the difference. Unless you are like me who now has 12 wigs in various colours! The girls in work bought me a t-shirt at the beginning of my diagnosis which has the slogan ‘Brighter days are ahead’ and it’s something that has stuck with me throughout my treatment.  Cancer does not define a person but makes them stronger and you are never alone. As an avid Liverpool fan… ‘You’ll never walk alone!’ Not every day is sunshine and daisies but having a positive mental attitude has helped me through the horrendous 6 months and to think about what’s ahead. Also like the late Tom Parker (the wanted) said ‘some days stay gold forever.’

Meet with others who have been or are going through a similar journey to you.

Order or download your free copy of our information booklets for patients, friends or family members at the click of a button.

Help us support everyone affected by a leukaemia diagnosis receive the right information, advice and support.

Did you know you can donate to Leukaemia Care each time you make a purchase on Amazon?