Find out what we got up to for our 50th anniversary year.

A Year in Patient Advocacy

April saw the launched of our WhatsApp service where our nurse and wider Leukaemia Care team are on hand to give information and offer advice and support via the messaging service. We also launched a Hospital Travel Fund and our Ann Ashley Leukaemia Counselling Fund.

Also, throughout the year we have:

A Year in Campaigns

This year, Leukaemia Care turned 50 years old. Throughout the year, we have not only been celebrating our achievements since 1969, but also using the year to highlight issues that still affect blood cancer patients today.

Leukaemia Care started in 1967 as a group of parents gathering around a kitchen table to discuss how they could support others affected by leukaemia. All had children affected by a diagnosis of leukaemia but were determined to support each other and turn their pain into something positive for others in the future. They turned this into an official charity, registering in 1969. You can learn more about the origins of the charity on our website here.

How have we celebrated our 50th year?

Whilst treatments for all types of leukaemia have come on leaps and bounds, and so survival rates increase, learning to live with or after blood cancer becomes more important. For the first part of the year, we dedicated our social media, newsletters and magazines to raising awareness of these ongoing issues, using the hashtag #LC50. We also provided practical tips to help patients deal with these challenges day to day.

In January, we addressed diet and exercise, asking chronic myeloid leukaemia (CML) patient and fitness fanatic, Drew Laird, to give you all tips on getting back to exercise post-diagnosis.

In February, we talked about sex and relationships. Our Nurse Advisor, Angie, joined Patient Advocacy Manager, Charlotte, on our podcast to remind patients to be open and honest with their loved ones and that no question to your nurse is a silly question.

Patients shared their struggles with fertility issues in March, sharing stories of heartbreak and of surprise.

In May, we chatted with Usha Grieves from Compassion in Dying about the ultimate taboo in any cancer patient’s life, and why we should all talk about dying more. To help with these conversations, we developed new toolkits to help you plan funerals, write wills or communicate your wishes with those around you.

In the summer months, we highlighted the challenges for blood cancer patients when it comes to enjoying the wonderful weather and a chance to relax. We gave advice on staying safe in the sun and produced a new Advocacy Toolkit to help you find the best value travel insurance possible.

Additionally, throughout the year, we repeated our Spot Leukaemia messages. Diagnosing leukaemia earlier has been shown to improve outcomes and survival rates of patients, which is why we focus on this every year. Our hashtag #SpotLeukaemia reached over 11.5 million people in 2019, double the number we reached last year.

Throughout the year, these messages helped Leukaemia Care reach over 2.5 million people online, and more in print. More importantly, the campaign helped raise awareness of the ways in which a diagnosis of blood cancer affects every aspect of a patient’s life and emphasises the need for more support.

The biggest Spot Leukaemia yet

Our anniversary of registration falls on the 11th of September, which, as many of you will know, coincides with Blood Cancer Awareness Month, during which we run our Spot Leukaemia campaign. While we kept up the message of Spot Leukaemia year-round, we really stepped up the campaign to combine a celebration of the charity with the biggest September campaign yet! We did this by advertising as widely as possible, to reach as many people as possible.

Patients shared their diagnosis stories with us, highlighting symptoms to look out for and encouraging others to pay closer attention to their health. 36 patients told their stories, with 15 doing so on camera. Sharing these stories, as well as other posts and podcasts, helped us encourage 58,000 people to visit the Spot Leukaemia website to learn more about the campaign.

We also held a campaign event in the Houses of Parliament, hosted by Henry Smith MP. This annual event helps us raise awareness of the Spot Leukaemia campaign with MPs, policymakers, other charities, the press and more, to spread the message as far and wide as possible. It was also a wonderful opportunity to thank those who help the charity each year, from patients and their families to nurses and doctors.

A Royal visit to celebrate our 50th anniversary

To round off a fantastic 50th celebration year, we were honoured to be joined by HRH the Duchess of Gloucester, GCVO at our head office in Worcester. The Duchess was invited to meet staff, patients and healthcare professionals involved in our work. She heard how the work of Leukaemia Care, whilst having changed over the years, is still as vital as ever in supporting those affected by blood cancer. The Duchess also revealed a plaque marking our 50th year and commemorating the visit for the future. 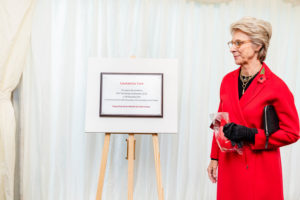 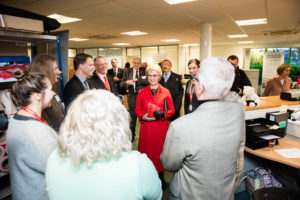 A Year in Fundraising

The national newspaper carefully selects three charities every Christmas and Leukaemia Care has been chosen alongside The Silver Line and Wooden Spoon.

After a staff vote, Leukaemia Care were asked to present to executives at the newspaper and in September received the news that they would be one of three charities for the 2019 appeal.

The campaign was officially launched on November 2nd and will run through until January. The focus of Leukaemia Care’s appeal will be sharing stories and experiences from those who have been affected by leukaemia.

On 1st December, the Telegraph hosted their annual phone-in day where their readers were able to make a donation over the phone. Telegraph journalists and celebrities took it in turns to man the phone lines. In 2018, 900 callers donated £85,000.

Peter Mondon, Leukaemia Care CEO, said, “We’re delighted that we’ve been chosen by the Telegraph as one of their charities for their famous annual appeal. We’re particularly proud to be able to use this platform to highlight real stories from those who have experienced leukaemia, or are living with leukaemia, to raise awareness that leukaemia is a complicated blood cancer type.

“Being a part of this appeal has rounded off an exciting year for the charity as we mark 50 years of supporting people.”

In 2018, the Christmas appeal raised over £460,000 for Young Minds, Changing Faces and the Firefighters charity.

You can catch up on all our stories that have been featured in The Telegraph here.

Fundraisers go all out for our 50th year

Our fundraisers mean the world to us, as they enable us to continue to support all those affected by blood cancer. Here, we take a look at just a few of those very special people who did their bit for blood cancer patients in 2019.

Laura Jacques and her family have spent much of 2019 organising a number of exciting events for Leukaemia Care, including a successful quiz night that raised an astonishing £2,708.14!

Having set themselves a target of £5,000, they’ve nearly reached their goal in less than a year, and have also helped to raise awareness of leukaemia and its symptoms by getting involved in our September #SpotLeukaemia campaign.

Two runners that helped to make the 2019 race such a success were brothers Ben and Ed Bowler, who raised a staggering £15,023.70 between them.

Claire Merritt, Community Fundraising Officer for Leukaemia Care, said, “He has done fantastically this year; his work/volunteer ethic and dedication to doing the collections for us is just incredible—we are so grateful to him for his hard work. Since November 2018, Tony has raised £1,686 for us from supermarket collections.”

Dharmesh takes to the skies

Earlier this year, fundraiser Dharmesh Mehta took on a skydive for Leukaemia Care, raising an amazing £1,678.16.

Dharmesh himself was diagnosed with chronic myeloid leukaemia (CML) despite not experiencing any symptoms. Dharmesh is now doing well, and along with taking on a skydive, he also shared his story for our #SpotLeukaemia campaign, which you can read on our website at: http://bit.ly/DharmeshMehta.

After teacher Sarah Paling was diagnosed with acute myeloid leukaemia (AML), her school, Crackley Bank Primary School, decided to get stuck into fundraising to show their support.

Now in remission, Sarah has been supporting the pupils in their latest fundraising event where they went spotty for us as part of our #SpotLeukaemia campaign. The school have raised a brilliant £2,148.73 to date.

Sarah also shared her story for #SpotLeukaemia, which you can read here: http://bit.ly/SarahPaling.

At this year’s Prudential RideLondon, one brave team took on the 100-mile cycling race in aid of blood cancer patients.

Team Sofa to Saddle, comprised of 21 novice riders, put their all into both their training and fundraising, raising an amazing £10,677.05!

We’d also like to mention one hard-working fundraiser who has dedicated a large amount of her time to supporting Leukaemia Care in 2019.

Carolyn Whittaker sadly lost her husband Roger in 2014 after he was diagnosed with AML. In memory of Roger, Carolyn has been crocheting our hugely popular ‘Bob the Blood Drops’, which have sold out numerous times on our eBay shop this year. She has also hosted collections in her local supermarket and has so far raised over £1,100.

A huge thank you to everyone who fundraised for Leukaemia Care in 2019.

Could you do the same in 2020? Get in touch with our Fundraising team by emailing fundraising@leukaemiacare.org.uk to receive your free fundraising pack.

Finally, we’d like to say a big thank you for all your support during the last twelve months. Without it, we would be unable to provide support to those who need it. We hope you will continue your support through 2020.

Learning about cancer and cancer treatment is a continuous process. Every new idea and development in treatment needs to be tested in a way that is scientifically reliable. This is done by testing the treatments in controlled trials.