23-year-old Niamh put her symptoms down to the stress of her teaching placement, but as her symptoms worsened, she was prescribed antibiotic after antibiotic to no avail. Eventually, Niamh spoke to a GP who listened to her symptoms, and she was diagnosed with acute myeloid leukaemia (AML). Read Niamh’s Spot Leukaemia story. 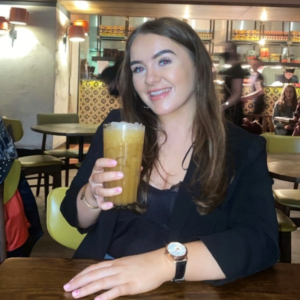 My symptoms began when I was a student primary teacher during COVID-19. The first thing I remember which wasn’t quite right was during my first placement – I experienced a really heavy period whilst at the school. I had always experienced heavy periods, but this was different, it was as if there was no clotting. It lasted seven days; however, I put this down to stress with my course. It took me over a month after this to visit my GP despite having symptoms of blood cancer, my skin was ghostly white, I was breathless, had night sweats and had persistent chest infections but the main thing that made me visit the GP was that I had started fainting frequently and was uneasy on my feet.

After this, it then took me 53 days to start another period. During this time, I had finished my first placement and started a second two-week placement block at another school. During the last week, which was in December, I developed a cough and was told to go home to isolate as I had developed symptoms of COVID-19. I went for a test and it came back negative, but I didn’t get rid of my cough and couldn’t go back into school as my teacher had tested positive.

At this point, my cough had progressed – it was chesty, causing me to be quite breathless, and I was sweating during the night. I phoned my doctor relaying my symptoms and he told me it sounded like I had a chest infection – I was given antibiotics for a week. After the week, the chest infection hadn’t cleared. I was still unwell, so I phoned up again and was given a different antibiotic for another week. Again, after this week the cough still hadn’t cleared so I was given a further course of antibiotics. After this, I had started my period (after the 53 days) which was similar to my first heavy period, but it was even heavier – I was bleeding through sanitary item after sanitary item to the point I had to change them every half an hour. I had also noticed that when I was brushing my teeth, my gums were streaming with blood after it, but again I had put this all down to the stress of not feeling well, my course and just brushing my teeth too hard, as I didn’t know the symptoms.

It was 9th January at this point, and I was taking a shower when I felt really dizzy. I got out the shower and fainted. I phoned NHS24 and told them about my chest infections and feeling really dizzy and they thought I had labyrinthitis and prescribed me medication for this. 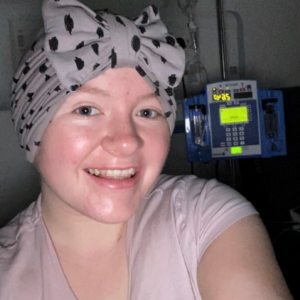 On 14th January, I kept having this fainting sensation, was really uneasy on my feet, my period was still really heavy, and my chest infection hadn’t cleared, so I phoned my GP and asked if they could finally see me. My GP listened to my symptoms, asked me questions which I didn’t know at this point related to blood cancer, and she got me in for an emergency appointment. I went into my GP and was seen by a nurse who was shocked at how pale I was – she sent me to the hospital as my pulse and temperature were too high for her to be comfortable to let me go home, but she was comfortable diagnosing me with anaemia. When I got to hospital, I had an ECG, blood tests, urine samples and was then sent to Gynaecology as they originally thought I was so pale and fainting due to my heavy period. The gynaecology doctor saw me and told me he didn’t think I belonged at this department and they had referred me to haematology.

I was later taken into a room by my now haematology consultant where I was told – alone – that he was in no doubt that I had leukaemia and my journey started from there. I had to get a bone marrow biopsy and a few days later I found out that I had acute myeloid leukaemia (AML). It was horrific finding out I had cancer by myself and going through treatment alone too; I am lucky now that I am allowed one visitor, but it has horrific feeling lonely throughout this journey, even though on my devices I am surrounded by love. 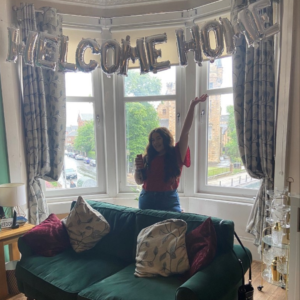 I’ve now been out of the hospital since June. Since then, I’ve been discharged from weekly hospital check-ups to now three-monthly. I have had a bone marrow

biopsy which I will also be getting done every three months. It’s nice to know I am getting checked up on but it’s also amazing to get a break from hospital visits and the anxiety that comes with it. I’m now focusing on getting my life back to normal, appreciating every moment and loving my life again.

Looking back now, if I knew the symptoms of leukaemia, I wouldn’t have been so reluctant to go to the doctors as I didn’t want to ‘waste their time’. I wish I would have known then what I know now.

Your feelings and emotions

A diagnosis of a blood cancer can affect you emotionally as well as physically. We can help you to understand what you’re going through.