Gary was looking forward to the birth of his first child when he received a shock diagnosis of acute lymphoblastic leukaemia (ALL). Here, he shares his story and how he’s doing now.

After coming back from a lovely holiday in March, my partner, Helen, said at the end of April that she thinks she’s pregnant. Being the disbelieving soul that I am, I made her do three tests (apparently you don’t need to do three tests!). We were over the moon, our first child! We couldn’t have been happier. We only told our close family and a small number of friends as we were going to see them in New York for a couple of days in May.

We had a great and very busy trip, which is why, when we got back, I initially thought I was just tired from the travelling and that I must have caught a bug on the flight. I took a few days off work and then tried the commute a couple of times; each time was exhausting, and I couldn’t catch my breath when I got there. When I got to the office I was met with “you look awful, go home”.

After a couple of weeks of cold and flu remedies and a massage to ease my back pain, Helen finally persuaded me to make an appointment at the doctors. Being a typical man, going to the doctors wasn’t something I did. The doctor said, “Hmmm, it must be something, we haven’t seen you in four years!”

I went through all my myriad of symptoms and he listened and said, “Okay, I think we will send you for a blood test and chest X-Ray just to be sure there is nothing serious”.

I thought nothing of this and went off to have my test on the following Monday morning. When I finished the tests, I asked, “How long before you know any results?” and was told “can be a couple of weeks”, so went home and fell asleep on the sofa. An hour later, my phone rings and it’s the doctor asking me to come to the surgery. He explained that the blood results were looking low and I needed to go to A&E with a letter he provided right that minute.

At this point, it started to dawn on me that this was something serious. I called Helen to tell her I was on my way to hospital and she found me in A&E.

I was moved to an oncology ward which was a bit of a clue. A doctor came in and said, “We need to do a bone marrow biopsy, could you roll onto your side?”

I had no idea what a bone marrow biopsy was (very naïve of me at the time). The next day, the same doctor came back to see us and said, “You have leukaemia. A consultant will see you soon.”

Hearing those words, my whole world fell apart. I was never going to see my baby, a baby I’d waited my whole life for. I was going to leave Helen alone, and how was I going to tell my family, as my father died of leukaemia when I was 12. I’d let everyone down and there was nothing I could do about it.

Strangely I couldn’t cry, I was numb and too ill to really digest everything that had happened so suddenly. One minute, the happiest in my life, the next, my life was over.

Turns out my diagnosis was Philadelphia chromosome positive acute lymphoblastic leukaemia (ALL), which just rolls off the tongue. We were told that the treatment was to cure, but honestly at that moment I’d heard enough bad news about leukaemia just to think the worst. Good news information isn’t easy to find.

I was moved late at night to King’s College Hospital in London (I had no idea why. Turns out for good reason, as they are the experts at this stuff) and watched over by the nurses as my infections had really taken hold. After a few days of infusions and steroids, I could concentrate enough to listen to my treatment plan from my amazing Clinical Nurse Specialist (CNS). I was astonished at the time that this document was all ready to go! We had a deal that I couldn’t get my head around months of the plan as it was too much information, so they broke it down into a fortnightly plan for me.

The conversations and information we had from my CNS was like a light being put on at the end of a dark tunnel. The internet made things worse, so I read the information they gave me from Leukaemia Care, Bloodwise and Macmillan. Maybe this wasn’t the end. They are just talking about getting on with it and making me better! They gave us hope and this was incredible.

After six weeks in hospital, I could go home. I cried a bit at this point, as I was scared to leave the safety of the hospital and was starting to understand the gravity of everything.

I learnt to tick each day off my 28-day treatment plan (Induction one and two, Consolidation, Intrathecal Chemotherapy etc) which helped me see that things were moving forward.

Unfortunately, halfway through phase two chemotherapy I developed several quiet serious infections, including neutropenic sepsis, influenza B and aspergillus to name but a few. I was very sick and back in the hospital for seven weeks.

Chemotherapy is hard, but I learnt that however hard it is, it’s only temporary. It will pass. For a while, I didn’t know the person I saw in the mirror, so I wouldn’t look in the mirror.

Everyone is different and their effects can be different, there is no one size fits all. For me, food and being sick meant I lost a lot of weight. So much so, I ended up with a feeding tube. I resisted for as long as possible, but I saw children in the hospital with them, and if they could do it, surely I could, and nutrition is so important during treatment and recovery.

Early in my treatment plan, the CNS and consultants talked about the need for a stem cell transplant. I can honestly say I’d hardly heard of this let alone knew what it meant or involved.

My sister came to visit and was asked to give a blood test to see if she was a match. A few nervous weeks passed, and we heard the amazing news that she was a great match! After my infections and weight loss, I was in no fit state for my transplant, so it was moved back. This felt heart-breaking to hear but turned out to be perfect timing. I could go home, get fitter and put weight on at the same time that our baby was due.

At 8am on the 23rd December 2017, Freya came into the world at home and I was there. I would have missed it if my transplant hadn’t moved. Two weeks later, I was in hospital ready (after a bit more chemo) for the big transplant day!

Transplant day is funny for recipients, all day waiting for such a big life changing event and wondering how the donor is doing. Then a 20 minute IV and its done (a little bit more for the donor though, my sister says).

The following days waiting and hoping that the transplant grafts are the longest days I can remember. My post-transplant experience has been slow progress, but progress none the less. A few infections and stays in hospital, which is normal with such a new immune system, a DLI (Donor Lymphocyte Infusion) top up, which helped push my chimerism to 99%, which was great news.

After seven months, I could return to working from home part-time, which was strange normality after the full year out and it was really tiring. Work have been amazingly helpful and accommodating to me, which took so much extra stress away. I’m now 19 months into my maintenance phase with my next bone marrow biopsy in September. There has been no sign of the marker for my disease and all is going as well as we all could hope.

I don’t want to ring a bell or shout “I beat” anything, because I’m not going to tempt fate, but mainly because there are other people whose journeys may have just begun or taken a different route. In HOP (Haematology Outpatients), we are all going through our own thing, but we all cheer each other on. The amazing nurses (they know who they are), doctors, consultants, all the staff and other patients are a team, working to help all of us.  Most importantly, I feel lucky to have seen my little girl grow from a tiny dot to a walking and chatting toddler.

We got married at the end of June. We made plans. We hadn’t made any long terms plans for nearly two years. I’m both scared and optimistic about the future all at the same time.

My life has changed, and my outlook has too.

I am happy and I am here and that is the most important thing. 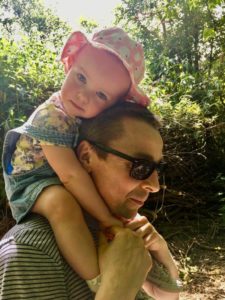 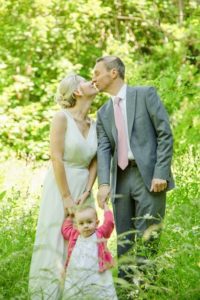 Returning to a “normal” life can see you reintroducing exercise into your daily routine. The following links contain excellent resources about exercise during and post treatment for a blood cancer.