Alice was diagnosed with acute myeloid leukaemia at the end of 2019. Her treatment was forced to change as COVID-19 spread, and again as she herself was diagnosed with COVID-19 the same day she was told she had relapsed. Here, she shares her experiences.

I would say I was under the care of my haematologist for under a year, in between flying in and out the country for (up to) month-long stints at a time. I was having regular blood tests and biopsies done to whittle down certain diagnoses. I had extreme fatigue, which I put down to jet lag from working internationally. I struggled with exercise classes that I’d once breezed through, and unexplained bruises were appearing on my body.

My haematologist didn’t like the look of my swollen right tonsil, which kept producing calcium stones and getting infected. Little did I know this was a warning sign of what was happening inside my body. They took a biopsy and it came back clear. I had CT scans, an endoscopy and, as a last resort, he sent me for a bone marrow biopsy, expecting nothing sinister to crop up.

Four days later, I was told alone in a room full of nurses, a doctor and a consultant (not my own) that I “might” have cancer. They should have said for me to bring someone in. In sheer denial and disbelief, I flew to Ireland for the week to work, despite the advice from the consultant to stay at home. They did a few more tests that week, then confirming my acute myeloid leukaemia (AML) diagnosis on Friday the 13th. Unlucky for some – I like to see it as them potentially saving my life. This time I brought an entourage of family members into the room. They told me I had 80% cancer cells in my bones, and we had to act quickly.

I spent Christmas and New Year in what can only be described as a dream-like state trapped inside a bubble where everything is a bit too confronting and horribly surreal.

In January, I had fertility treatment and successfully had 10 eggs stored for the future. I needed four rounds of high-dose chemotherapy. I had three types altogether, which equalled 35 bags and actually took part in a trial for Mylotarg. It was extremely effective and after the first round wiped 78% of the blast cells. 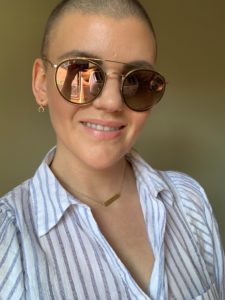 My treatment plan was altered after my second round due to the worldwide spread of COVID-19 and my stem cell transplant was deemed unsafe.

Luckily, I was classed as in remission by my third round, but to consolidate that I still needed to proceed with the fourth round, which thankfully cleared the cancer 100%. I had treatment from January through to July 2020 spending 148 days in solitary isolation, same four walls, with no visitors because of COVID-19. It was awful. However, I did it and I was cancer-free! 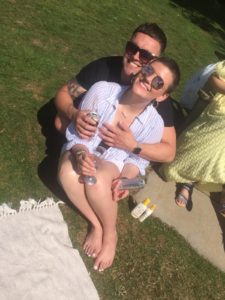 Alice at a surprise party to celebrate her remission

I started to get my strength back, my hair back, my life back and my job back. I was in remission for five months until I had a biopsy a week before Christmas.

I relapsed. My consultant found out on Christmas Eve. This time, he waited to tell me until after Christmas as he “didn’t want to ruin this one as well”. This time 20% cancer cells in my bones.

But not only had the leukaemia returned, I also found out I was positive for COVID-19 on the same day my consultant told me the cancer was back. 30th December 2020.

I had started developing symptoms on 26th December. I initially had a tickly throat, the sort that wakes you up in the night. Then a general feeling of being run down, but I put that down to a Christmas Day hangover!

The following day I felt like I had a cold. A poor performance in the gym made me worried the cancer had come back – quite a normal feeling for a cancer survivor. I kept it to myself and carried on.

Then the symptoms really hit. Bizarrely awful dreams – mainly because of the fevers. Aching all over, head cold, cough, sickness, diarrhoea, out of breath to go to the toilet. I struggled to muster the energy to walk upstairs and I couldn’t even stand for too long as I was getting dizzy spells. I also had absolutely no appetite and loss of taste – which still isn’t back!

I went for a test on the 29th December and received the results on the 30th followed by a call from my consultant telling me the cancer has relapsed. It was a horrific day.

As my immune system was already compromised (unbeknown to me), I was struggling to heal from coronavirus, and when I started coughing up blood, I called an ambulance. They took me to A&E and I stayed in hospital for the next four nights and five days. I was on oxygen, a drip, steroids, antibiotics and needed a platelet transfusion as my counts were very low and my bloods were showing that I was neutropenic.

I wouldn’t wish COVID-19 on anybody, and I know it comes in varying degrees, but I have never had a type of flu before. I kept describing the feeling to people as day two or three of chemo – it just wipes you out; you feel like you’ve been hit by a bus.

By the end of January, I was only just starting to feel better. 29 days later. I still didn’t have any taste and was continuing to get dizzy spells. I returned to the hospital to have a top-up of platelets, but I couldn’t start my chemotherapy and transplant plan until the hospital were 100% confident I was over it. I was forced to wait, building up my strength, letting my lungs heal as much as possible.

The hospital needed two negative swabs before my treatment could begin. If it were to test positive, I would have weekly swabs until I had two consecutive negative results. This would prevent treatment for my leukaemia from starting. They forewarned me that the coronavirus could stay in my body for up to 90+ days, all the while my cancer multiplying and progressing, slowly consuming me. It was a worrying and unbelievably scary thought.

Thankfully, I had three consecutive negative swabs and started chemotherapy on 10th February. I spent weeks in isolation. Treatment for leukaemia is incredibly physically and mentally challenging on its own, let alone for all of us trying to beat the disease in a global pandemic, as no visitors are allowed.

I’d just like to highlight to people that, as awful as having COVID-19 was (for me and many others), I am neutropenic as I have cancer, which means my immunity is compromised anyway, so I am deemed clinically extremely vulnerable. I SURVIVED IT – I was hospitalised, and it wasn’t mild by any means. Just know that it’s not always a “death sentence”. Some media discourse can make it harder for people in our position, giving us that added pressure, stress and worry, and I hope that my experience will give at least one other person battling cancer some reassurance.

Download all the graphics you need to support World Leukemia Day